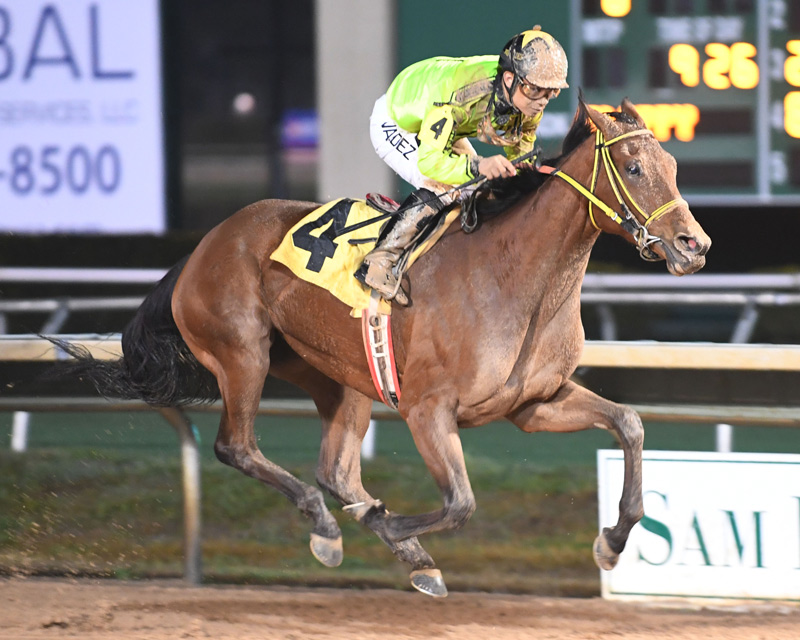 The 5-year-old son of Mizzen Mast out of the stakes winning mare Annie Savoy was the runner-up last year in the Richard King. Jockey Lindey Wade had the return call and rallied gamely past the pacesetter P Millers Clock to win by a margin of a neck.

“I rode him for Kari at Remington Park and felt he would run well tonight,” said Wade. “We had a good trip and he put it all together.”

Mav Master covered the mile and one-eighth over a sloppy track in 1:54.44 with Special Praise under Ernesto Valdez Jiminez finishing second over P Millers Clock. Tap That Word completed the superfecta.

“Zippit E ran a great race,” said Calhoun, from his base in New Orleans. “Lindey got her on a better part of the track and she finished well. Archer City did not get as clean of a trip, but I was pleased that she ran third.”

Prada’s Bling, with Efigenio Ruiz in the saddle, was forwardly placed throughout the race and held for second.

Imma Bling Blazed to Victory in the $50,000 Spirit of Texas
The most dominant performance of the evening was delivered by Flurry Racing Stables’ Imma Bling in the $50,000 Spirit of Texas. She was cross-entered in tomorrow’s $75,000 Frontier Utilities Turf Sprint, but owner Staton Flurry chose wisely. With Quincy Hamilton in the irons, the 5-year-old daughter of Too Much Bling took the lead at the top of the stretch and drew off by 11 lengths. His final time of 1:10.26 was the fastest on the nine-race card.

Flurry claimed Imma Bling for $25,000, and won the $75,000 Bonapaw Stakes at Fair Grounds last month. He is trained by Karl Broberg.

“We knew how well this horse was training and can’t say enough about (assistant trainer) Kevin Martin and the crew back at Oaklawn. We’ll look for another spot for him back there.”

Joe Bravo was named on Imma Bling, but could not make the trip to Houston. Hamilton, who has won the leading rider title at Sam Houston in three previous seasons, was happy to fill in.

The winner was the Henry Witt bred and owned Witt’s Town, a-4-year-old filly by Drums of Thunder. She had won four of her eight turf starts and placed fourth in the Fiesta Mile at Retama Park. Despite being pinched back at the start, jockey Ernesto Valdez-Jiminez ably guided her through the field and drew off by a margin of 3 ¼ lengths. She completed the mile and one-sixteenth feature, over a sloppy track, in 1:47.89.

Witt, who also bred and owns Witt Six, winner of the 2017 Star of Texas, was on hand to accept the trophy.

“She comes from way off the pace,” he explained. “Sometimes she’s so far back you can’t even spot her, but it’s fun to watch her finish.”

This was the seventh career win for Witt’s Town, who rewarded her supporters with a win payout of $5.20. Sexy Dance ran second, with Dagny third and Shezadoll completing the superfecta.