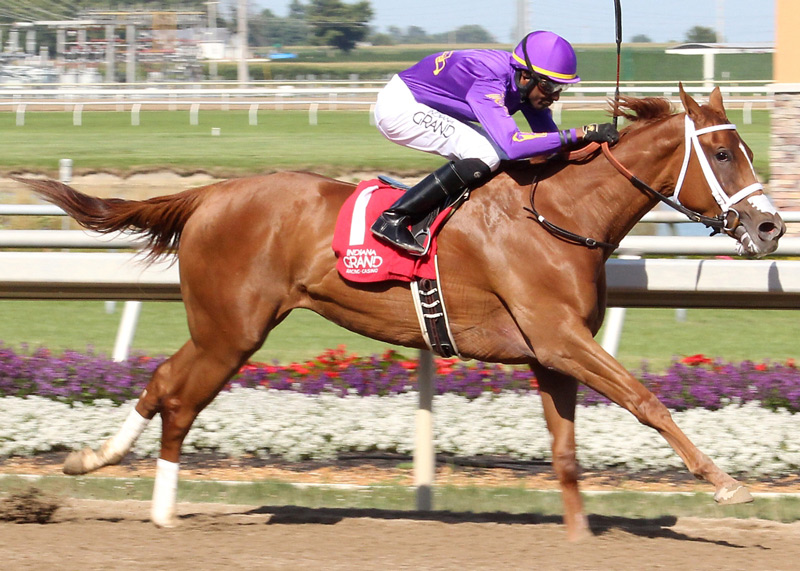 Marina’s Legacy and DeShawn Parker have been competitive this season, but everything didn’t line up until the 15th running of the $150,000 Indiana First Lady Stakes Wednesday, Aug. 9. The duo earned their first win of the year in a big way, scoring the title in gate to wire fashion.

Starting from the inside post one of the nine filly field, Marina’s Legacy wasn’t the first out of the gate but her inside positioning got her up close early and in a great spot to land the lead before they reached the turn. Parker had Marina’s Legacy focused on her job as race favorite Whistle Stop and Marcelino Pedroza pressed the pace to her outside with Midnight Blvd and Robby Albarado also adding some pressure three wide.

Once the field had straightened down the backstretch, Marina’s Legacy got a little bit of a breather, but never shook loose from the top two. They tracked her progress every step of the way waiting for her to retreat. In the final turn, Defining Hope also got into the mix and made a bid on the outside for Malcolm Franklin, but by the time the field had turned for home, Marina’s Legacy still had control of the lead and increased her advantage with every stride. In the end, Marina’s Legacy was a seven and one-quarter length winner over Midnight Blvd and Whistle Stop.

“Once we got to the lead, she (Marina’s Legacy) pretty much did everything herself,” said Parker, who has won more than 5,200 career races. “She got away well and I didn’t expect to get the lead so easy. Every time they came at her she fended them off. And, when they didn’t, she was able to relax.”

Five doctors make up the Bone Doctors Stable with Dr. James Gabel representing the group for the stakes race, the richest outing for Marina’s Legacy in eight career starts. Gabel, a veterinarian and former member of the Ohio State Racing Commission, formed the Bone Doctors Stable with his son, an orthopedic surgeon. Since that time, they have added three more partners, all doctors.

“I told Ethan (West) before the race she hadn’t faced her own type before (referring to Indiana breds) on the dirt,” said Gabel, who has been involved with horse racing for over 50 years. “This is the best race she’s ever run.”

Marina’s Legacy is trained by Aaron West and his younger brother, Ethan, oversees the Indiana operation for the family. West Thoroughbreds is based out of Russell Springs, Ky. at the former Joe Cain farm. Aaron juggles the remainder of the stable between several tracks and also has Marina’s Legacy the majority of the time.

“She (Marina’s Legacy) stays at the farm and ships up on race days,” explained Ethan. “She is definitely a turf horse but she handled the dirt very well today. We didn’t know how she would react if something came up and pressured her but she got the early lead and DeShawn (Parker) gave her a perfect trip. This is definitely a team effort behind her win today.”

Marina’s Legacy will return to West Thoroughbreds’ home base in Kentucky but will be back at Indiana Grand for more stakes action in September.