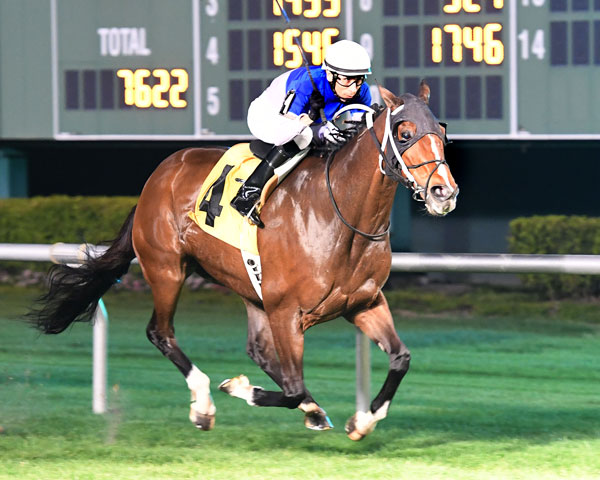 Two stakes were contested on Saturday at Sam Houston Race Park with trainer Steve Asmussen and rider Iram Diego winning both the $50,000 Houston Turf and the $50,000 Sam Houston Sprint Cup.

Diego, who is riding first call for Asmussen in Houston, took advantage of a very slow first quarter-mile, and just gave his mount free rein. The bay gelding looked very comfortable as he ran the half-mile in :51.05 and crossed the wire of the mile and one-sixteenth turf contest in 1:45.27.

Asmussen claimed the bay gelding from trainer Mike Maker for $5,000 last July at Ellis Park. The seven-time leading Sam Houston Race Park conditioner, who also trains Magna Breeze, was pleased to see the veteran runner back in the winner’s circle.

“It was nice that they let him get away like that,” said Asmussen, who was reached by telephone following the victory. “(Assistant) Pablo (Ocampo) and Iram have done a great job with him.”

Sing It Up, at odds of 43-1, closed for second under Jason Eads, three lengths behind Magna Breeze. Mav Master was third, followed by Early Ride, Special Praise, Can’t Be Wrong, Preacher Preacher and Spider’s Alibi. Bonjour Baby was scratched by order of the stewards.

Sent off as the second choice in the wagering, Magna Breeze paid $6.20 to win. This was the tenth career win from 32 starts. He earned $30,000 for the victory, increasing his lifetime bankroll to $230,379. Magna Breeze was bred by Joanne Schapiro.

But, once again, Asmussen and Diego were victorious, this time with Union Jackson, a 5-year-old son of Curlin owned by Stonestreet Stables LLC. The Kentucky-bred runner is Grade 3 placed, and made his last start opening weekend at Fair Grounds, running third in the $75,000 Thanksgiving Handicap.

Despite not breaking well, Union Jackson settled behind Bravura through the opening quarter of :21.78, and taking command at the top of the stretch. Diego guided the chestnut horse to victory in 1.09.21, winning by a margin of 8 ¼ lengths.

“He is so awesome,” Asmussen stated. “Iram gave him a great ride and he could not have looked better.”

Diego, who won three races this evening, is very appreciative of the opportunity to ride for the Hall of Fame conditioner.

“Honestly, I have never ridden a horse of that caliber before,” Diego said. “He did everything I asked and did it so easily!”

This was the fifth wins from nine starts for the Kentucky-bred, who increased his career bankroll to $208,924.

Bravura, Sam Houston Race Park’s 2016 Horse of the Meet, ran a game second under jockey DeShawn Parker. Bred and owned by Victoria Ashford of Dallas, Texas, Bravura is a 4-year-old son of Early Flyer is trained by Bret Calhoun. Running third was Meme Jo followed by Mascherato, Ishaq, Turn Up The Lights, Flat Back, A M Milky Way and Chifforobe.

Asmussen was not certain of the next start for Union Jackson ($2.60).

“It was a significant stakes win and we’ll go from there,” he stated.