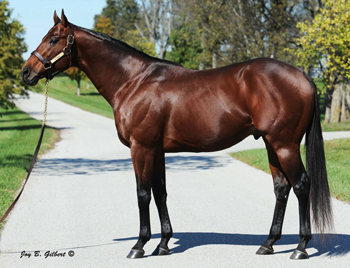 Notional, who stood the last two breeding seasons at Rockin’ Z Ranch in Oklahoma, has been relocated to Indiana for the 2017 breeding season to stand at Swifty Farms. He will stand for a fee of $2,000 as property of Randy Haffner, Tommy Wente and David Bogue, according to an article on DRF.com.

Sired by In Excess, Notional earned $733,240 on the track with victories in the Grade 2 San Rafael, Grade 3 Risen Star Stakes and Grade 3 Salvator Mile Handicap. He also finished second in the Grade 1 Florida Derby.

From five crops to race, Notional has sired the earners of more than $7.2 million. His leading earner is Far Right, winner of the 2015 Southwest Stakes (G3) and runner-up to American Pharoah in the Arkansas Derby (G1). Far Right raced in the Kentucky Derby (G1) and has banked $701,866.