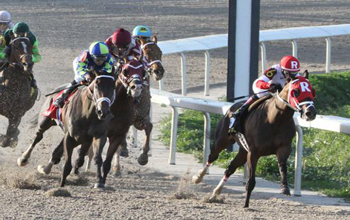 Ken and Sarah Ramsey’s Vicar’s in Trouble, so impressive winning the Grade 3 Lecomte Stakes at Fair Grounds Race Course by 6 ¾-lengths on January 18 but compromised by an unfavorable outside post in the Grade 2 Risen Star Stakes on February 22 when he finished third, returned to his winning ways with 3 ½-length front-running victory in Saturday’s Grade 2, $1 million Louisiana Derby with Fair Grounds’ soon-to-be four-time defending jockey champion Rosie Napravnik aboard.

With his impressive Saturday score that puts him once again in the national spotlight in this spring’s Kentucky Derby picture, the Mike Maker-trained Vicar’s in Trouble became the first Louisiana-bred to win the Louisiana Derby since the Timphony family’s Heaven Again accomplished the same feat in 1990. The win earned Vicar’s in Trouble 100 points and a position in the Kentucky Derby starting gate at Churchill Downs five weeks from now on May 3.

After establishing early fractions of :23.56 and :47.86, Napravnik kept the small but compactly-built son of Into Mischief going with good handling and the eventual winning result was never seriously in doubt. Vicar’s in Trouble accomplished the nine-furlongs in 1:50.77, returning mutuels of $8.60, $4.40 and $3 and increased his lifetime earnings to $788,900 with three wins from five trips to the post.

“You know he’s a tiny horse but he’s got a great big heart,” said Napravnik.

Starlight Racing’s favored Intense Holiday, who won the Risen Star Stakes five weeks ago, was void of early foot, commenced a rally approaching the lane, ducked in sharply almost hitting the rail in the stretch run to lose momentum and could not threaten the winner while clearly second best by 1 ½-lengths in front of West Point Stable’s Commanding Curve.

“The inside horse jumped out, right on me, but the race was over at that point,” said Hall of Fame jockey Mike Smith, who rode Intense Holiday.

In Trouble finished fourth and Albano fifth, but that order was reversed by the stewards for In Trouble’s bumping incident with Albano leaving the backstretch.