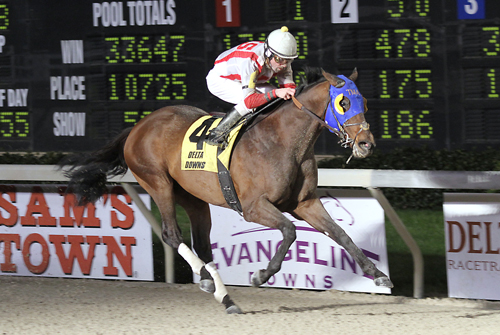 Populist Politics, a tough Louisiana-bred stakes winner who won for the 10th time in his 45-race on Wednesday night at Delta Downs, has been claimed for $4,000 and retired by original owner Klaravich Stable and trainer Tom Amoss. An earner of $653,396, the 8-year-old bay horse is still intact and was winning for the first time since Feb. 16, 2015 and only the second time in 12 starts since being claimed from Klaravich (Seth Klarman and Jeff Ravich) and William H. Lawrence for $20,000 on Dec. 29, 2014.

“It was initiated by Klaravich,” Amoss reported. “They texted me (Tuesday) and said he was in for $4,000. They said we should take him back and I put up half and they put up half and now we’ll retire him. He goes out a winner, which is really neat, and he’s really sound, despite his deteriorating performance.”

Bred by B. Wayne Hughes of Kentucky’s Spendthrift Farm, Populist Politics, by Don’t Get Mad, had a record of 33-8-8-8 for Amoss and Klaravich, including finishing first in six stakes and being awarded five of those following a disqualification in the 2011 $75,000 Crescent City Derby. Among his best victories were a 1¾-length victory in the 2010 $50,000 Louisiana Futurity at second asking, a 4½-length win the $75,000 Louisiana Showcase Mile and a 6½-length romp in the $60,000 Mr. Sulu Stakes.

In some of his top efforts Populist Politics placed in 11 stakes, including the Grade 2 $500,000 Super Derby in 2011. Some of the talented foes he clashed with include Tapizar, Prayer for Relief, Alternation, Redeemed and Sunbean. In arguably his best race, he nearly put an end to Louisiana Legend Star Guitar’s nine-race winning streak when losing by a head to the four-time state-bred Horse of the Year in the 2012 $90,000 Costa Rising Stakes.

Star Guitar would go on race once more and be retired to stud with 10 consecutive victories to cap his career.

“He’s going to retire a happy horse,” Amoss concluded. “He goes up to a farm in Ohio and they’ll retrain him and see what he wants to do, whether that’s do something else, or become a (racetrack) pony. Otherwise, he’ll live his life out eating grass and being a horse.”