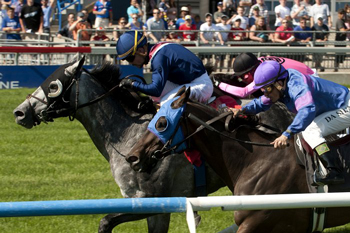 Excaper, winner of the Connaught Cup (G2) and runner in the Breeders’ Cup Juvenile Turf (G1), has been retired to stand at Francisco Bravo’s River Oaks Farms in Oklahoma as the property of Mike Grossman in a deal brokered by Chad Schumer. The son of Exchange Rate will stand for a fee of $2,000.

A high-class 2-year-old, Excaper broke his maiden first time out at Woodbine and signed off his juvenile campaign by running second in the Breeders’ Cup Juvenile Turf (G1) at Churchill Downs.

Subsequently a tough and consistent performer, he later captured the Connaught Cup (G2) at Woodbine and ran placed in the Play the King Stakes (G2), King Edward Stakes (G2) and Kent Stakes (G3).

In all, he won or was placed in 15 stakes races.

“Excaper is a horse that offers world class 2-year-old form,” said Chad Schumer. “He is also by a leading 2-year-old known for siring fast and early types, so a perfect horse for the Oklahoma market.”

A son of Exchange Rate, Excaper is a half-brother to six winners including Listed scorer Quiet A Ruckus. His winning dam Ada Ruckus, by Bold Ruckus, is a half-sister to successful Canadian sire Tethra.