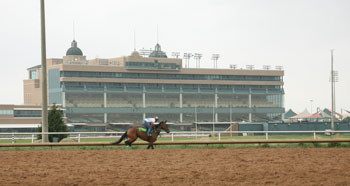 Lone Star Park concluded its 20th anniversary Thoroughbred season July 30 with an 11.7% increase in live handle, the largest year-over-year increase since the track opened in 1997.

“It was a terrific Thoroughbred season as is befitting our 20th anniversary,” said Scott Wells, president and general manager of Lone Star. “We were up over the last few years in nearly every category, the exception being total attendance, and that is due to the fact that we had three concerts instead of six.”

“Racing fans saw some of the top horses, jockeys, trainers, and owners in the sport. There was the Cinderella story of Texas Chrome, who was purchased right here at Lone Star Park for only $10,000 and he became a millionaire here this summer. Several of the horses who raced here will be racing in the Breeders’ Cup World Championships in November,” Wells added.

Jockey Richard Eramia won his first Lone Star riding title. He finished the meeting with a total of 68 wins from 319 starts for an earnings total of $1,023,083. Iram Vargas Diego was just three wins shy of Eramia, with a total of 65 winners from 314 starts. Diego racked up earnings totaling $949,424. Finishing third was Sasha Risenhoover with 47 victories from 237 starts and earnings of $620,424. Risenhoover set a new record for most wins by a female jockey during a single season at Lone Star. The previous record of 33 was set in 2001 by Deirdra Panas.

Asmussen also earned his second owner title at the Grand Prairie racetrack, where he scored 31 wins. Keene Thoroughbreds was second with 27 wins for the season.