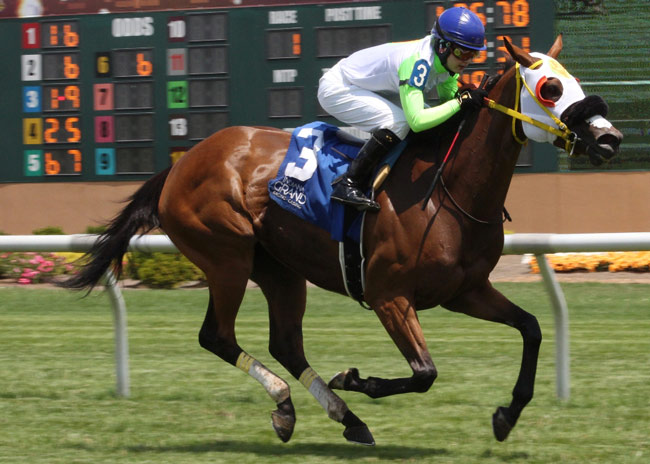 It was the first time this season that racing fans at Indiana Grand Racing & Casino got to watch Lady Fog Horn over her home track and she didn’t disappoint. Indiana’s two-time Horse of the Year circled the field to win the $45,000 allowance race over the turf with Indiana Grand’s leading jockey Katie Clawson aboard for the first time.

Starting from post two in the six horse field, Lady Fog Horn used just enough early speed to get early positioning in behind La Peregrina and Rodney Prescott, who established the pace along the inside. They were tracked closely by Sweet N Wicked and Dick Cardenas on the outside. Moving toward the final turn, the horses from the back of the pack began to make their moves forward so Clawson got Lady Fog Horn out into a clear path and began inching up toward the leaders.

At the top of the stretch, Lady Fog Horn was in full stride as she burst onto the scene to take control of the race. The five-year-old daughter of Zavata rallied out to a four and three-quarter length advantage at the wire, posting the mile in a time of 1:38.95. La Peregrina held onto second, just a neck ahead of Sweet and Wicked for third.

“It is a privilege to ride a horse like her (Lady Fog Horn),” said Clawson. “She raced just like she shows on paper and in her replays. It was my first time aboard her and with a horse like her, you just want to let her race and not get in her way.”

Lady Fog Horn upped her career earnings total to $824,273, which has a significance all its own. Following her previous start at Delaware Park in the $100,000 Obeah Stakes where she finished third, she officially became the richest Indiana bred Thoroughbred ever. She surpassed Unreachable Star’s tally of $784,595 to take over the prestigious title.

Owned by Stuart Grant’s The Elkstone Group LLC, Lady Fog Horn used the race to prepare for her next start, which will take place on Indiana’s richest night of racing Saturday, July 15. Trainer Tony Granitz will have a decision to make with Grant leading up to that night.

“We wanted to use this race as a springboard to one of the stakes on Indiana Derby Night,” said Granitz. “She (Lady Fog Horn) is nominated to one on the grass and one on the dirt. Katie (Clawson) said she handled the grass great so I’ll get with Mr. Grant to see which one we will go in that night.”

Lady Fog Horn has been nominated to the $100,000 Indiana General Assembly Distaff (turf) and the $100,000 Mari Hulman George Stakes (dirt) during Indiana Derby Night. Granitz noted that although there is only 11 days between her start Tuesday, July 4 and her next race, Lady Fog Horn will have a bit of a break after her stakes race on Indiana Derby Night Saturday, July 15.

“Her next Indiana bred stakes race is not until September, so she will have about six weeks,” said Granitz. “She’s had a couple of tough trips this year so right now, we are thinking of keeping her in Indiana, but I’ll talk with Mr. Grant about that.”