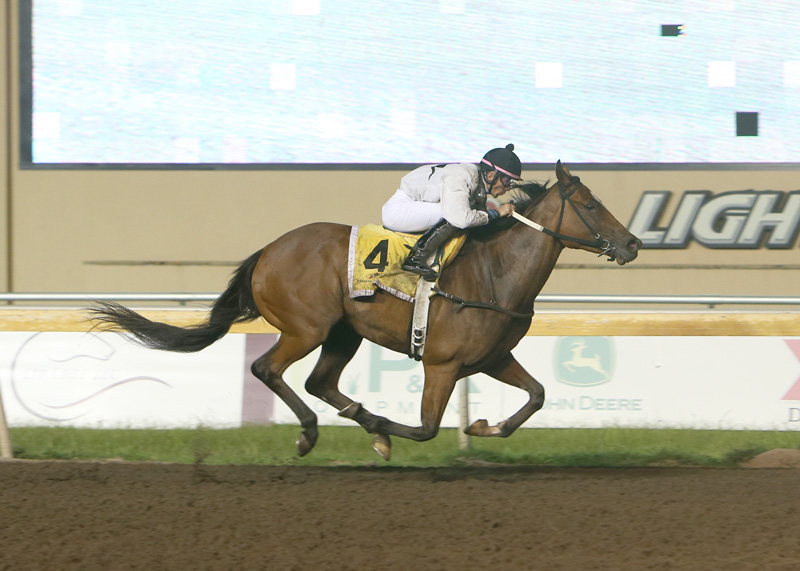 When Kaleo smoked the field by 13-3/4 lengths at the seven-furlongs distance under a confident Leandro Goncalves in the saddle, Craddock had clamped down on the ownership of this race. In the past two years, she had won with Ninethirtyturbo for Kirk Thoroughbreds of Luther, Okla., in 2020 and with Number One Dude for Terry Westemeir of Broken Arrow, Okla., in 2021. She had a third different owner this year, herself. Craddock owns, trains and bred Kaleo in Oklahoma. Goncalves won for the second straight year while jockey Lane Luzzi was aboard Ninethirtyturbo two years ago.

“He made me look good,” Goncalves said after the race. “I liked his chances but I really didn’t expect to win by this much.”

Kaleo, a 3-year-old gelded son of Foreign Policy, out of the Election Day (IRE) mare Beuna Fortuna (MEX), was unraced as a 2-year-old and didn’t win a race until his third start at Will Rogers Downs in Claremore, Okla., this spring on May 11. He followed that up with a near win in the $55,000 Will Rogers Stakes at WRD. He ran second in that event, losing by only three-quarters of a length. After an uneventful try at Lone Star Park in Grand Prairie, Texas, on the turf for the first time (eighth-place finish), he was given a rest from June 26 until Friday night.

Kaleo was certainly unrushed as four horses went to the front ahead of him on the backstretch. He dropped back five lengths behind, running fifth at the half-mile pole before blowing by the front runners like a category five hurricane.

“I just let him travel the first half of the race,” said Goncalves. “When he finally kicked in, I just hoped he wouldn’t stop and he sure didn’t.”

Little Drama, who went off the same odds as the winner at 5-2, held on for second in a different county, but he finished second easily ahead of Lava Bomb (4-1), who was 16-1/2 lengths back of the winner. Rowdy Rascal, the 3-2 wagering favorite, could do no better than fourth, a head behind the third-place finisher.