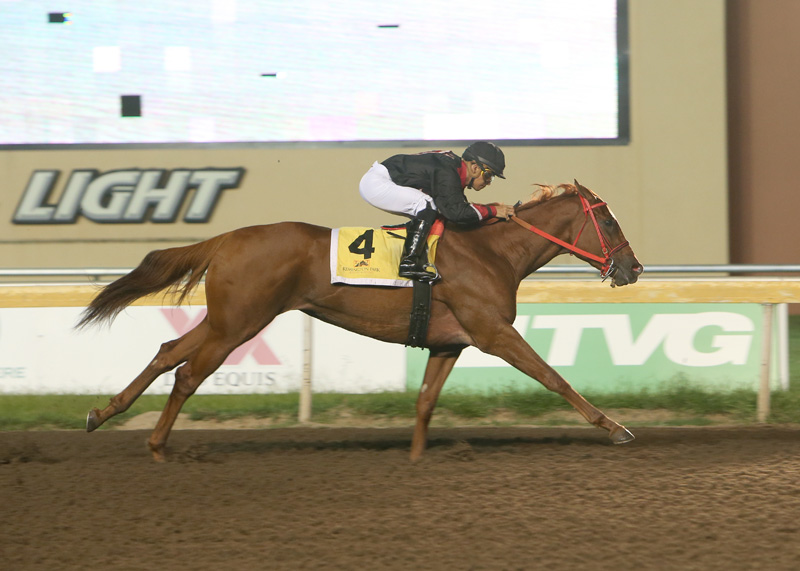 C.R. Trout of Edmond, Okla., does it all as owner-breeder-trainer with most of his racehorses but he gave most of the credit Friday night to his top man in the barn for a third win in the $50,000 Oklahoma Stallion Stakes Fillies Division as the filly Hits Pricey Legacy rolled to victory.

“I can’t take much credit for this win,” Trout said after watching Hits Pricey Legacy cruise to a 4-1/2 length victory. “Daniel Ortiz has been really patient with her and got her to where she is right now.”

Where she is right now is one of the top fillies in the Trout barn and his third winner in this race. Trout had hit a bit of a rut in the past four meets after winning this race in back-to-back years with Euro K Shotgun in 2016 and Sunday Night Miss in 2017, but he appears back on track with Hits Pricey Legacy. She is a 3-year-old homebred daughter of Den’s Legacy, out of the Concord Point mare High Price Hit, owned by Trout.

Jose Alvarez was the third jockey to win this race for Trout as Luis Quinonez and Richard Eramia have also done their part. Quinonez rode Euro K Shotgun in 2016 and Eramia booted home Sunday Night Miss in 2017. Trout has been owner-breeder-trainer for all three of his winners.

“I really think Hits Pricey Legacy is going to want more distance, maybe a mile and a sixteenth,” he said. “We’re going to shoot for the Oklahoma Classics (Friday, Oct. 21) with her I believe.”

It was Alvarez’s first win in this series and he was highly impressed with his winner.

“She ran great today,” he said. “I put her right behind the speed and she gave me everything she had when I asked her to run. How she ran today makes me believe she will be even better next time.”

The winning time for this filly for seven furlongs was 1:23.54 on the fast track, a faster time than the colts and geldings ran in their division Friday night. Hits Pricey Legacy was sent off the 1-2 favorite and returned $3 to win, $2.40 to place and $2.10 to show to her backers. She pocketed $30,000 from the purse and improved to six starts, three wins, two seconds and one third for $139,355 in earnings.

It was the second stakes win for Hits Pricey Legacy as she also won the $75,000 Slide Show Stakes at Remington Park on Nov. 12 last year in her 2-year-old campaign. The most impressive thing about her win Friday night is that it came off a nine-month layoff. She hadn’t raced since Dec. 17 when she ran third in the $100,000 Trapeze Stakes.