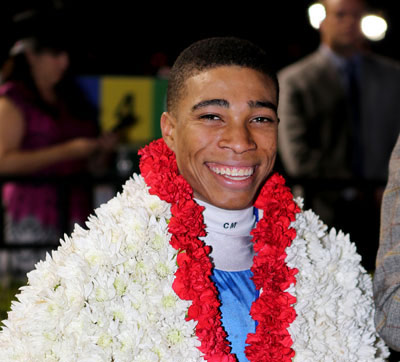 After setting a record for most victories by a jockey last spring and summer at Lone Star Park, C. J. McMahon has ventured to Gulfstream Park to seek success during the 2017 Spring and Summer Meets.

“I think it might be a good opportunity to get to where I want to be in my career,” said the 22-year-old native of Lafayette La., who rode at the recently concluded Fair Grounds meet.

McMahon was the leading rider the past two years at the Dallas-area track, winning 98 races last season at a 34-percent clip and 95 races at a 33-percent clip in 2015. He had planned to return to Lone Star Park this spring until trainer Keith Bourgeois raised the idea of riding at Gulfstream Park instead.

“I had the opportunity to play golf with Mr. Keith Bourgeois and Robby Albarado. We started the conversation about here and [Bourgeois] said, ‘Man, you should try it out over there,’” said McMahon, who looks upon Albarado as his mentor. “I kind of bounced it around, and the next day, he asked me again. I said to myself, ‘Hey, he’s serious.’ I reached out to [agent] Walter Blum and he got back to me three weeks later and said, ‘Let’s go.’”

McMahon has won more than 200 races in each of the past two years and has amassed 796 wins in six-plus years of riding. McMahon rode his first winner on his first day of riding April 6, 2011 at Evangeline Downs.

The son of a Quarter Horse jockey notched his first victory at Gulfstream in Friday’s first race, scoring aboard A Fashion Affair ($13.20), who was saddled by Bourgeois, who is also based at Gulfstream Park for the first time.