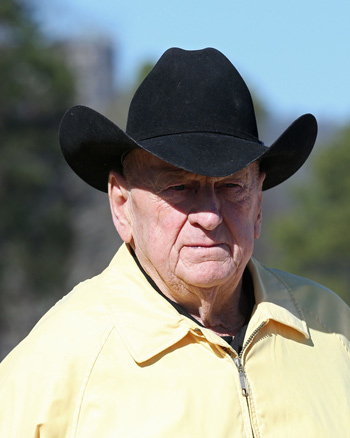 Jack Van Berg normally holds court during training hours at Oaklawn from his pickup truck parked on the grandstand apron. That wasn’t the case on a windy, cold Jan. 4 morning, when the Hall of Fame trainer tested the elements, and his frail body, by taking his horses to the track on a pony.

“I love horses,” Van Berg said. “I love to take horses and watch them improve.”

A month later, Van Berg, 79, continues to turn back time.

As Oaklawn enters its fourth week of racing, Van Berg is tied for second in the trainer standings with five victories from 21 starts, needing only two racing days to eclipse his combined victory total from the previous two meetings. Van Berg was 0 for 17 in 2014 and 1 for 53 last year. He hasn’t won six races at an Oaklawn meeting since 1995.

He was Oaklawn’s leading trainer in 1983 and 1984 before shifting his base to Southern California in the late 1980s. Van Berg relocated to the Midwest in late 2013 after he said a failed ranch deal left him starting from scratch professionally.

“You can’t win if you don’t have any stock,” Van Berg said. “I was in that ranch deal in California and got cheated. I was a broke man. I had to start over.”

Van Berg returned to Oaklawn with eight horses in 2014, but he has 21 now after picking up two major clients in the last two years – Jerry Caroom of Hot Springs and country music star Toby Keith’s Dream Walkin’ Farms.

Giant Trick, ninth in the Springboard Mile, broke his maiden for Van Berg and Caroom Jan. 16. Eurodevilwoman, a 3-year-old Euroears filly, finished second in a Jan. 18 entry-level allowance sprint for Van Berg and Caroom. Overall, Van Berg has around 10 horses for Caroom and wife Mary, including Zimmerman, a 3-year-old Sky Mesa gelding claimed out of a runner-up finish in Saturday’s third race for $50,000.

Although Van Berg can’t stand for extended periods because of back and knee problems, the trainer said he hasn’t lost his thirst for success. Asked if he could contend for his third Oaklawn training title this year, Van Berg, confidently, said all he needs is the horsepower.

“If I can get somebody else to claim a few, I will,” Van Berg said.

Van Berg won an Eclipse Award as the country’s top trainer in 1984 and was inducted into the National Museum of Racing and Hall of Fame in 1985. He is best known for training 1988 Horse of the Year Alysheba, winner of the 1987 Kentucky Derby and Preakness Stakes.

Van Berg saddled his first winner in 1957, according to Equibase.
(from Oaklawn press release)