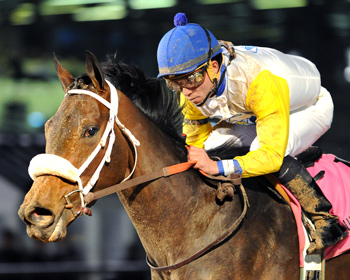 It was a superb night of racing at Sam Houston Race Park with exhilarating performances by Forever Unbridled in the Grade 3, $400,000 Houston Ladies Classic and Da Big Hoss in the Grade 3, $200,000 Connally Turf Cup. This was the first time in its 23-year history that Sam Houston Race Park hosted two Grade 3 races and both features attracted nationally prominent horses, trainers and jockeys.

Charles Fipke’s Unbridled Forever picked up her second graded stakes victory this evening. The 4-year-old daughter of Unbridled’s Song is trained by Dallas Stewart, who retained the riding services of one of the top jockeys in North America, Joel Rosario. Forever Unbridled, who competed in the 2015 Kentucky Oaks (G1), won the Grade 3 Comely at Aqueduct on November 28. She came from off the pace to win that main track effort, and won this evening in the same fashion.

Defending champion Cassatt broke sharply and went immediately to the lead, covering fractions of :24.42; 48.79; and 1:12.49. Forever Unbridled unleashed her kick, passing the gray mare and completing the mile and one-sixteenth stakes over a fast main track in 1:43.74. She earned $240,000 for the victory.

“I had my worries when I saw the lead that Cassatt had,” said Bentley Combs, assistant to Stewart, who made the trip to Houston to saddle the winning filly. “Larry Jones trains great horses, but I was confident in our filly and Joel’s ability. With this filly’s talent, she can run from any spot on the track.”

Rosario had a big day at Gulfstream Park, winning three races and two stakes. This was the first time the talented jockey rode at Sam Houston. He and fellow riders Joe Bravo and Julien Leparoux jetted from Florida to Houston, arriving around 7:30 pm.

“I didn’t talk to Dallas, just to the assistant and he told me to ride her with confidence, that she was the best horse in the race,” said Rosario.  “I just took my time; as I hit the 3/16th pole, she got a hold of the track and I knew we were in a good position.”

Cali Star, a 5-year-old Street Cry mare, who won the Grade 3 Rampart at Gulfstream Park, closed for second under jockey Julien Leparoux. She was shipped from Florida by trainer Martin Wolfson, and ran very well for owners Ben Walden and Larry Taylor.

Trainer Larry Jones, always gracious, had nothing but respect for the competition. He won the inaugural Houston Ladies Classic with Joyful Victory, who like Cassatt, was sired by Tapit.

“I didn’t see anything wrong with her effort tonight; the other two fillies were just really good,” commented Jones.

Forever Unbridled, left the gates as the favorite, paying $4.40, $2.80 and $2.10 across the board. Theognony, Welcome Aboard and Diva’s Diamond, completed the order of finish. Rose to Glory was an early scratch.

The Houston Ladies Classic was the first stakes of the Penn Gaming Racing Challenge. The national program, now in its third year, will incorporate over 20 stakes races in 2016 worth over $5.5 million. In its first two years of existence, the Penn Gaming Challenge has been won by top national owners Fox Hill Farms in 2015 and Ken and Sarah Ramsey in 2014, Mike Maker and Chad Brown in the trainer category, while Javier Castellano has been the top jockey in each of the first two years.

The nationally prominent horseman made it four victories with this year’s entrant, Skychai Racing LLC’s Da Big Hoss. Bred in Kentucky by Gary & Mary West, Da Big Hoss is a 5-year-old son of Lemon Drop Kid out of the Touch Gold mare Lady Struck Gold. Distance is certainly no problem for this runner, who won the John’s Call at Saratoga going a mile and 5/8ths. Claimed for $50,000 in June, Da Big Hoss proved his affinity for turf routes, coming off the pace to win the 12 furlong, $600,000 Kentucky Turf Cup at Kentucky Downs.

Maker, who is based at Gulfstream Park, watched the race from Florida, and was very pleased with the effort from Da Big Hoss and confident handling by rider Florent Geroux.

“He’s a real classy horse,” said Maker. “The pace was slow and Florent had plenty of horse. He’s got a great pedigree; just made for the longer turf distances.”

This was the first time Geroux had made the trip to Sam Houston, but he took off his mounts at Fair Grounds today and made the short flight over this afternoon. He sat off the pace set by Pumpkin Rumble, found an opening on the rail and accelerated to a 4 ¾ length lead. His final time, over the firm turf course was 2.28.16.

“My horse broke well from the gate and settled early,” said Geroux. “I just wanted to make sure to keep him clear and when I asked him, he finished well. It’s a great feeling and the horse really seems to like the long distances. It’s a very nice turf course. I wish racing were better in Texas as this is very nice racetrack.”

Galton Splits Foes to Capture the $75,000 Frontier Utilities Turf Sprint
Tom Amoss has a solid track record in the five-furlong turf sprint, winning the stakes with Sum Of The Parts in 2014 and last year with Heitai.

This he added a victory with Midwest Thoroughbreds Inc.’s Galton, a Kentucky-bred son of Offlee Wild. He won back-to-back turf races last summer at Canterbury Park, before finishing fourth in a turf stakes at Mountaineer on August 1.

Amoss knew his charge was accomplished on the turf and versatile enough to handle five furlongs. Rider DeShawn Parker guided the bay gelding, sitting off the pace and splitting horses in the final furlong. He drew off for the win in a final time of :56.69.

“He broke really sharp today,” said Parker, who picked up the mount originally given to James Graham. “I thought he would be further back as he had been running route races. I had him in a good position and when I asked him, he gave me a real good kick. It’s always exciting when you can win like that when they are going so fast on the front end.”

Amoss was reached in New Orleans after the race and had all good things to say about both Parker and his owners.

“DeShawn rode a lot of races for me at Mountaineer, where he is king,” said Amoss. “I can’t say enough good things about Midwest Thoroughbreds. They let me claim this horse and give me permission to train so many good horses.”

“He made it interesting,” said Cox. “Florent did a good job of getting him there.”

“I just wanted to get the job done today,” Geroux said. “They don’t give you an extra bonus if you win by ten lengths. He had blinkers on for the first time; keeping him focused.”

Sent off as the prohibitive favorite, Twirling Cinnamon paid $2.80 for the win, earning $30,000 this evening. He’s a Ranger ran second, followed by Riding in the Wind. Taylor’s Angiel was scratched from the stakes.