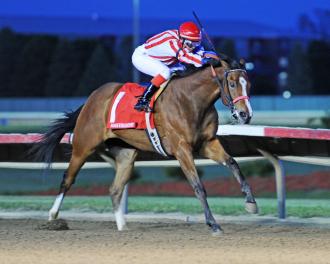 Prairie Meadows held a pair of Iowa-bred stakes this past weekend with It’s the Swede taking the $60,000 Mamie Eisenhower Stakes on Friday and Ooey Gooey winning the $60,000 John Wayne Stakes on Saturday.

In the Eisenhower for fillies and mares, William Hobbs’ homebred It’s the Swede scored her first stakes win with a two-length victory as the 1-2 favorite. The 3-year-old by Yes It’s True was ridden by Sasha Risenhoover for trainer Karl Broberg. It’s the Swede has now earned $91,386 with three wins in six career starts.

In the John Wayne, Paradise Stables LLC’s homebred Ooey Gooey scored a mild upset with 1 ¼-length win at 7-1 odds. Glenn Corbett rode the son of Political Force for trainer Kelly Von Hemel. This was the first stakes win for Ooey Gooey, who improved his record to 14-5-3-0 with earnings of $154,600.

You Funny Man got up for third with Rushin’ Rubietta in third.