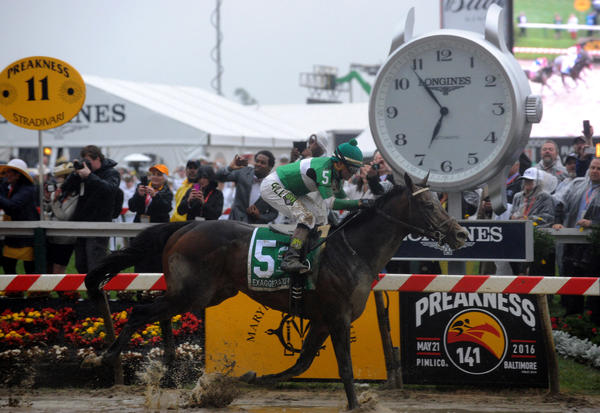 Exaggerator is owned by Big Chief Racing LLC, Head of Plains Partners LLC, Rocker O Ranch LLC et al. Big Chief Racing is headed by Matt Bryan of Flower Mound, Texas, and Rocker O Ranch, is headed by Ronny Ortowski of Fort Worth, Texas. The Desormeaux brothers are both from Louisiana and have strong ties to racing in that state. Exaggerator, a son of Curlin, also earned one of his biggest wins in Louisiana when he won last year’s $1 million Delta Downs Jackpot Stakes (G3).

The Keith Desormeaux-trained 3-year-old, who finished second behind Nyquist in the Kentucky Derby (G1) two weeks ago at Churchill Downs, was the recipient of a ground-saving ride from jockey Kent Desormeaux to prevail over 10 rivals in the $1.5 million Middle Jewel of the Triple Crown.

“I can’t fathom it,” said Kent Desormeaux. “It’s going to take a while. I’m in shock right now. I think Nyquist had company all the way around the course and stayed really wide, and I had a dream trip today. I was on the fence and they all stayed wide.”

After losing to Nyquist in their previous four meetings, the 5-2 second betting choice broke through with a dominating performance at the racetrack where his jockey launched his Hall of Fame career nearly 30 years ago and his trainer apprenticed under the late prominent trainer Charles Hadry.

Exaggerator settled well off the swift pace contested by Uncle Lino and Nyquist along the front stretch and around the first turn. Nyquist maintained a narrow advantage along the backstretch and into the far turn, while Exaggerator advanced quickly along the rail to loom as a threat. Nyquist shook free to lead the field into the homestretch after setting fast fractions over a sloppy track, but Exaggerator was in full stride in the middle of the track after being angled to the outside by Desormeaux and motored on by the favorite with fresh legs.