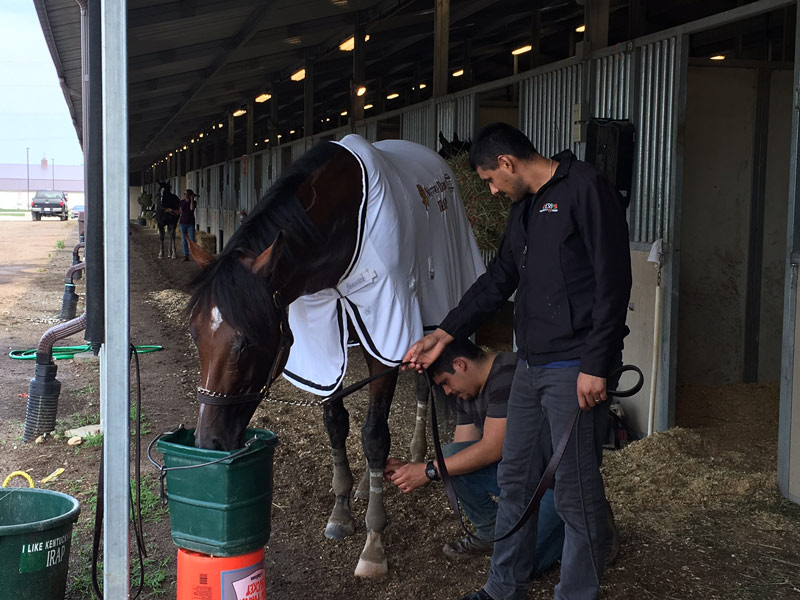 Post positions have been drawn for the Grade 3, $500,000 Indiana Derby Saturday, July 15 at Indiana Grand Racing & Casino. The early morning line odds have been established and Irap has been selected as the favorite at odds of 8-5 from post two in the 11-horse lineup.

Owned by J. Paul Reddam’s Reddam Racing LLC and trained by Doug O’Neill, Irap burst onto the scene in early April when he surprised the racing world with his 31-1 upset in the $1 million Grade II Blue Grass Stakes at Keeneland. He started in the Kentucky Derby but early traffic left him without a desirable trip and he finished 18th. Irap bounced back with an impressive performance in his last start, a victory in the Grade III $500,000 Ohio Derby. Jockey Mario Gutierrez, who rode Irap in the Kentucky Derby, will be back aboard for the 23rd running of the Indiana Derby.

“We are really happy about his ground-saving post,” said O’Neill via text following the draw. “He’s doing really well.”

Irap arrived at Indiana Grand Sunday, July 9 and has had the opportunity to get on Indiana Grand’s oval this week in preparation for Saturday’s race. The royally-bred son of Tiznow will face second choice Untrapped again, who finished third to him in the Ohio Derby.

Trained by Steve Asmussen, Untrapped also competed in this year’s Kentucky Derby, finishing 12th. The Trappe Shot colt, owned by Michael Langford, has been selected as the second choice on the morning line at odds of 6-1 and will begin from post nine with Jockey Ricardo Santana Jr. aboard.

The Indiana Derby will also have some crossover horsepower as Hall of Fame Indy Car Driver A.J. Foyt will have a horse in the field. Foyt owns Colonelsdarktemper, who finished second in his last start in the Grade III Matt Winn at Churchill Downs. Trained by William “Jinks” Fires, the Colonel John colt will be ridden by two-time Indiana Derby winning jockey Jon Court from post 10 at odds of 10-1.

“At least we didn’t draw the one,” said Court, who thinks his outside post works in his favor since the horse to beat (Irap) drew inside. “I can dictate a little bit how I can place myself. Hopefully, we’ll come up with a strategy and we can execute it. If not, we’ll go to Plan B. Sometimes Place C comes into play.”

Another horse that will get early play in the Indiana Derby field is Awesome Saturday, who starts from post eight with jockey Brian Hernandez Jr. aboard. The Any Given Saturday colt has a very impressive win in his last start at Churchill Downs and will be making his first start against stakes company in Saturday’s Indiana Derby.

“Sounds like there’s a bit of speed in there,” said Brian Hernandez Jr. “Being somewhat on the outside, we’ll be able to see what everybody else does going into the first turn.”

Hernandez knows that Irap will be the one to watch the closest on Saturday night.

“Just off his last race, he (Irap) showed where he doesn’t have to be on the lead and he was able to run down Girvin,” added Hernandez Jr. “We’re just going to have to go out there, trust our horse, let him put himself where he needs to be and let our horse do his own thing. We can’t go out there and worry about what they’re going to do. We just have to do what we need to do.”

Watch Me Whip was a late addition to the race as a supplement for Trainer Dale Romans and the Albaugh Family Stable. He will begin from post 11 at odds of 10-1 for three-time Indiana Derby winning jockey Robby Albarado.

“Hopefully we can get tucked in,” said Jason Loutsch, co-owner and racing manager for Watch Me Whip. “We’re either going to have to go out of the gate or we’re going to tuck way back. We’ll have to analyze the race and come up with a plan. We’re just excited to be in the race, and we’re just waiting for that breakthrough performance we know he has in him. I saw him (Irap) work last weekend at Prairie Meadows, and it was a very nice work. I obviously respect the heck out of him. He’s a Grade 2 winner and obviously the class of the field. Somebody is going to have run a heck of a race to beat him.”