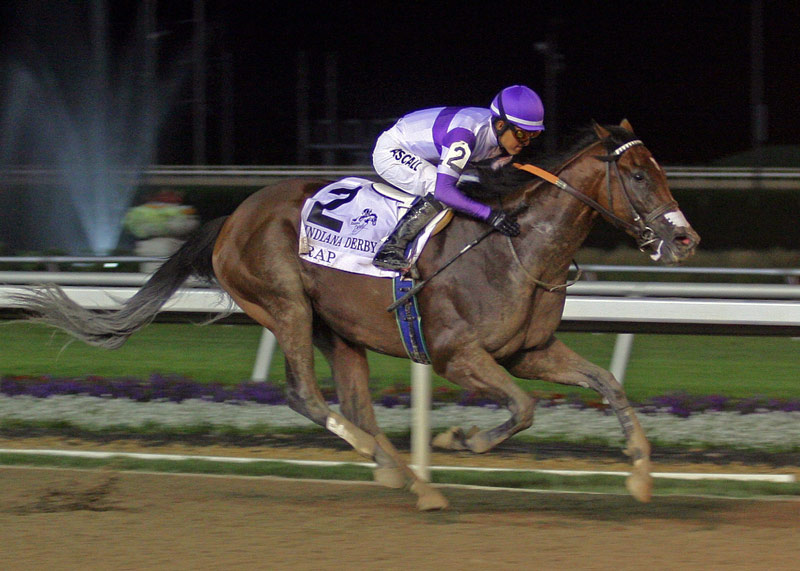 Irap proved why he was the heavy favorite in the 23rd running of the Grade III $500,000 Indiana Derby. The three-year-old son of Tiznow circled his competition in the final turn and rallied home a winner by five lengths under the direction of jockey Mario Gutierrez.

Due to a scratch on the inside, Irap found himself breaking from the gate from the inside in the 10-horse lineup. Wild Shot and Corey Lanerie just to the outside of him moved quickly out of the gate as expected to secure the top spot as Colonelsdarktemper and Jon Court also showed speed from the outside with Han Sense and Joe Bravo holding their ground between horses. Irap stayed in mid pack and maneuvered his way to the outside to stay clear of any potential traffic issues. At that point, it was just a waiting game for Irap and Gutierrez.

Irap slowly moved up on the outside of the front runners of the race and when the field hit the turn, the horse obviously kicked into another gear. Irap circled the field and by the top of the stretch, the lead was all his. He continued to utilize the center of the track as he progressed to the finish line. Colonelsdarktemper maintained his positioning to rally home second over Untrapped and Ricardo Santana Jr. for third. The time of the one and one-sixteenth mile event was 1:42.21.

“It helped that I got time to run a couple of horses over the track before this race,” said Gutierrez, who was making his riding debut at Indiana Grand. “When I asked for him (Irap) to run, he responded. He gave no indication to me he was slowing down at the wire.”

Irap, the heavily touted favorite of the field, paid $4.80, $3.20, $2.60 across the board. The victory in the Grade III Indiana Derby was his third Graded Stakes win and his second consecutive trip to the winner’s circle, also scoring the victory in the Grade III $500,000 Ohio Derby in his last start. After winning the Grade II $1 million Blue Grass Stakes in mid April, Irap finished a disappointing 18th in the Kentucky Derby.

“He (Irap) has definitely grown up since then (the Kentucky Derby),” added Gutierrez. “He was very unlucky in that race, and he was a bit immature back then. He has matured a lot, and he showed that today. Before he was the type of horse who couldn’t pull it off and clear horses; he kind of wanted to run with company. But he showed he’s not waiting on nobody any more. “

When asked about Irap drifting a bit in the stretch, Gutierrez explained, “He’s always been like that; Nyquist was like that too but this horse doesn’t do it as much. He’s still learning. His last couple wins were by a nose or a neck, so this was the first time he wasn’t waiting on horses. I really think he can still get better.”

Irap is owned by Reddam Racing LLC and trained by Doug O’Neill. The partnership of Reddam, O’Neill and Gutierrez has been very successful in years, connecting with two Kentucky Derby wins with I’ll Have Another in 2013 and Nyquist in 2016. Irap is their latest horse to emerge as the next star, boosting his career earnings to more than $1.2 million with his win in the Indiana Derby.

““I thought he’s matured as a racehorse now,” said Reddam, who is a former philosophy professor at California State University. “He always had the tools, which is why we put him in ambitious spots, but mentally he wasn’t quite there yet. Now he’s there.”

When asked about his next start, Reddam added, “Hopefully it begins with a T. We’ll take our shot at the big boys again.” That’s as in Saratoga’s Travers Stakes.

The win with Irap was the second for O’Neill in Indiana, who also connected with Excessivepleasure in the 2003 running of the race which was held at Hoosier Park.
“I think you have to (take Irap seriously),” said O’Neill. “He’s getting better with each race. We’ve learned so much from him. We just couldn’t be more happy than we are now. And Mario rode just a perfect race. Just very, very happy.”

O’Neill sent Irap to Indiana Grand early. He arrived with assistant trainer Sabas Riveria, exercise rider Johnny Garcia and groom Danny Robles on Sunday to get settled in. He made several trips to the track to prepare for the Indiana Derby.

“We weren’t crazy about the draw (post 2, which became the rail when Society Beau scratched),” added O’Neill. “But we’re generally pretty positive guys. So once we got the draw we said, ‘You know what, that’s a ground-saving post.’ He’s matured a lot mentally. But he’s a horse in the past who has never been really crazy about being inside horses. He’s so big. And Mario just did a wonderful job of making sure he controlled that first turn and got himself in a good position.”

Colonelsdarktemper, owned by famed Indy car driver A.J. Foyt, stayed up with the early pace setters and proved to be second best of the field. Trainer William “Jinks” Fires was happy with his colt’s performance.

“He broke well, that outside post, we had to go a little wide in the turn, four-wide, but he had enough speed to get up there and save a little ground and go to three-wide,” explained Fires. “I was tickled with how he ran. Some nice horses behind us.”

Although Foyt was not in attendance due to a car racing commitment in Canada, his grandson was trackside to watch Colonelsdarktemper.

“It was exciting to see him entered in the race,” said A. J. Foyt IV. “A.J wanted me to come down and represent him. He’s always shown a lot of heart and he showed it tonight and made our night. He ran a great race, and Jon and Jinks have done a great job.”

The race established new track records for handle for a single race and for the highest handle ever in the history of racing at Indiana Grand. A total of $1.150 million was wagered on the Indiana Derby, beating last year’s record total of $1.095 million. Also, wagering for the night surpassed the $3.3 million mark after the Indiana Derby with one race left on the program. The total handle from the 2016 Indiana Derby Night was $3,156,859. The new track record for handle from the evening was $3.581 million. Attendance for the evening was 13,622, also surpassing last year’s record attendance of 12,974.