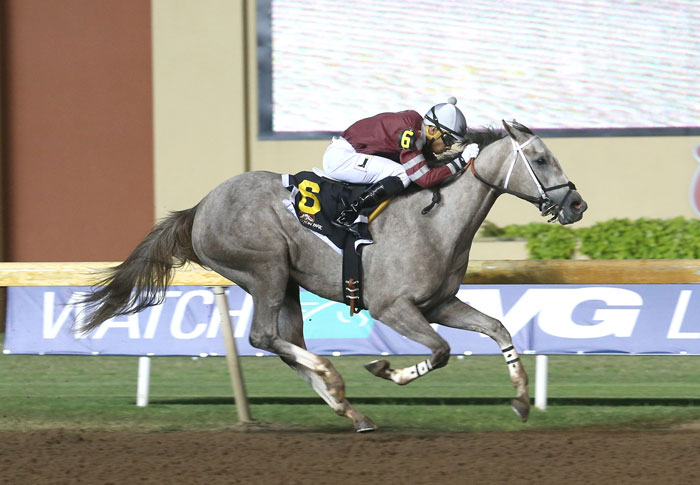 The first stakes race of the Remington Park season for 2-year-old fillies went to Chanel’s Legacy who pulled clear to win the $50,000 E.L. Gaylord Memorial Stakes by 4-3/4 lengths on Friday night.

Owned by Poindexter Thoroughbreds of Springfield, Mo. and trained by Lynn Chleborad, Chanel’s Legacy was ridden by Ramon Vazquez. The gray filly is lightly raced with a third-place effort in her career debut in a stakes race at Prairie Meadows in Iowa this summer and her two wins this fall at Remington Park. Her connections are hopeful of her future after gaining her first stakes victory.

“We thought a lot of her in Iowa by putting her into a stakes race in her first race,” Chleborad noted. “She’s young but she likes to work and she’s done nothing wrong. We think she’s going to be good and we just hope she keeps going.”

Vazquez placed Chanel’s Legacy in mid-pack, a stalking third just behind the leaders for the first half-mile of the Gaylord. In the middle of the turn, she began to move wide around the dueling leaders Country Candy and the Last Scout. With a quarter-mile remaining, Chanel’s Legacy was on even terms and then drew clear throughout the stretch before hitting the finish in 1:17.23 for 6-1/2 furlongs. She was 4-3/4 lengths clear of Texas-bred Country Candy, a daughter of Intimidator, with another Texas-bred, Gold Shock by My Golden Song, rallying for a distant third, 7-3/4 lengths behind the winner.

A winner of two races from three starts, Chanel’s Legacy was bred in Iowa by Allen Poindexter. The daughter of Dominus from the Value Plus mare Chanel Number Mine made $30,000 for her Gaylord triumph, pushing her overall earnings to $58,394.

The Gaylord Memorial is named in honor of the late chairman and publisher of The Oklahoman, the state’s largest newspaper. E.L. Gaylord was a staunch supporter of Remington Park in the track’s early history.