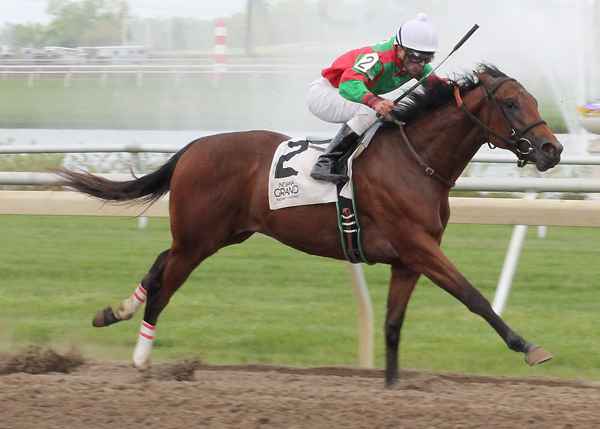 Whole Scoop, trained by John Hancock and ridden to victory by Albin Jimenez, cleared the front early and never looked back, winning by eight and one-half lengths under a hand ride by Jimenez, who was Indiana Grand’s 2015 leading jockey. The time of the race was :52.57 seconds. The chestnut daughter of Paddy O’Prado was a winner over stablemate Lineup for Kisses and Leandro Goncalves, who finished second by open lengths over third place finisher Radiantrithym and Sophie Doyle.

Whole Scoop is owned by Blue Checker Thoroughbreds, which is made up of Hancock, David Purcell and Larry Weinzapfel. The freshman came into the race off five works and was a $15,000 purchase from the Keeneland September Yearling Sales last fall. She was the favorite of the field, paying $3.60, $3.80, $2.20 across the board.

Unlike Whole Scoop, Sobrino was a bit of surprise in the 2-year-old colt ranks on Wednesday, May 11. The son of Successful Appeal got off to a quick start out of the gate in the 10-horse lineup and maintained his position until the finish line. In the stretch, heavily favored Envoyer and Ricardo Santana Jr. made a run at the leader, but Sobrino dug in a little more to take home the top spot by one and one-half lengths. Regal Justice and Eddie Perez finished third.

“I worked this colt (Sobrino) last Saturday and really liked him,” said Goncalves. “I was not surprised he won. He’s very smart and he worked like an old horse last week. He broke sharp and as soon as he cleared to the front, he came back to me and relaxed. When the other horse (Envoyer) came up on him in the stretch, I smooched once and he took off. He has a quick turn of foot.”

Sobrino was a $1,000 purchase from the Keeneland January All Ages Sale for Garcia, who recorded his eighth win in the 14th day of racing at Indiana Grand. Garcia leads the trainer standings in 2016.

On Tuesday, Jazz C Gal marked the first 2-year-old Quarter Horse win of 2016 at Indiana Grand. The daughter of Jazz Be First covered the 250-yard distance in a time of :13.956 seconds for Jockey Cesar Esqueda. Heisasgoodassheis and Rolando Pina finished a neck back in second over Jazz Light Em Up and Smitty Oxendine for third.

Jazz C Gal is owned and bred by Miguel Hernandez. The Indiana-bred filly is trained by Felix Barraza and came into the race off of one start at Remington Park in late March.