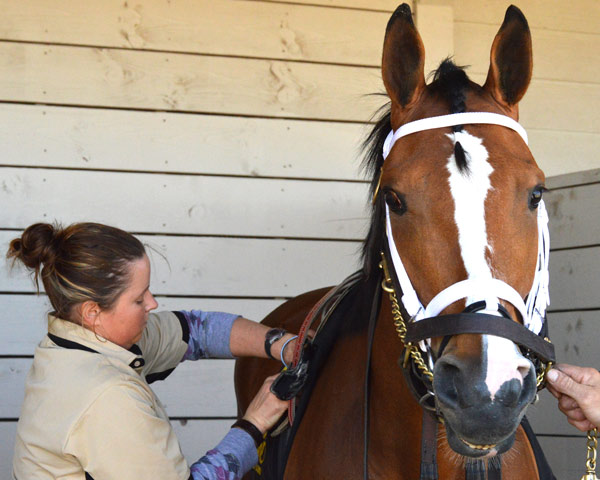 News typically occurs on the actual racetrack, but history was made on opening day of the 2016 meet at Indiana Grand Racing & Casino inside the walls of the jockeys’ quarters. Brittany Waugh, 31, became the first woman valet in the Hoosier state. The move to valet was just as much a surprise to her as anyone. While wintering at Tampa Bay Downs in Tampa, Fla., Indiana Grand’s Clerk of Scales Steve Cahill approached Waugh about the position for the upcoming 2016 meet.

“At first I thought he was kidding,” Waugh said, “I’d never heard of a female valet. But I figured I’d try something new. I knew what the job entailed since my boyfriend is a valet at Tampa. I went to the jock’s room with him on dark days and got to see firsthand what the job really entailed.”

For Cahill, this venture was something he had wanted to add for the past several years.

“I’ve been searching for a couple of years to find a female valet to come in,” Cahill said. “I’ve talked to some other women about it and gotten some lukewarm interest. I’d seen Brittany the last several years when she worked for Marvin Johnson and Randy Klopp, and I approached her this winter. She is so good with horses, her demeanor, her personality, everything about her. I’ve gotten nothing but great feedback.”

Waugh’s introduction to the equine world began during her youth on a farm in Whiting, Iowa. She showed horses in 4-H and was introduced to show jumping during high school. She attended college at William Woods University in Fulton, Mo., focusing on a degree in Equestrian Administration. That foundation led her to an internship at the Canterbury Park test barn in Shakopee, Minn. after her junior year. Upon graduation, she moved to Minnesota and also received her certified veterinarian technician license. Waugh worked at equine clinics during the year and at Canterbury Park, holding a variety of positions during the summer months.

Four years ago, Minnesota’s loss became Indiana’s gain. Totally unbeknownst to her, Waugh began working for someone in her own family tree. Upon arrival, she approached trainer Marvin Johnson about employment and they began chatting about her background. They soon discovered there were similarities in their lineage. She worked as his assistant and right-hand person for two summers and worked for trainer Randy Klopp last season.

Waugh has easily transitioned from her usual role in the barn to a new member as a valet at Indiana Grand.

“State Steward Stan Bowker called me aside and said he was watching saddling, and Brittany saddled a really rough horse and she did a wonderful job,” Cahill said. “Even a couple of the riders she has tack for came and told me how much they like her and how good of a job she’s doing. I am really glad to have her back there. She’s been a great asset to the team.”

Terry Warner, who has worked on racetracks for 45 years and been employed as a valet for eight of those years, says he’s seen maybe two or three female valets in his time.

“I think it’s a good idea with all the girl riders here,” Warner said. “They need someone on their side to help get things ready. She’s doing a great job saddling horses.”

After a couple of weeks into the current meeting, the fellow valets have happily taken Waugh under their wing.

“Everyone’s been great,” said Waugh, “I was nervous the first couple of days saddling, but I think I’ll continue to improve.”

Now having this to add to her already impressive resume, Waugh says she hasn’t thought too far ahead in regard to applying for further valet jobs at the conclusion of the meet.