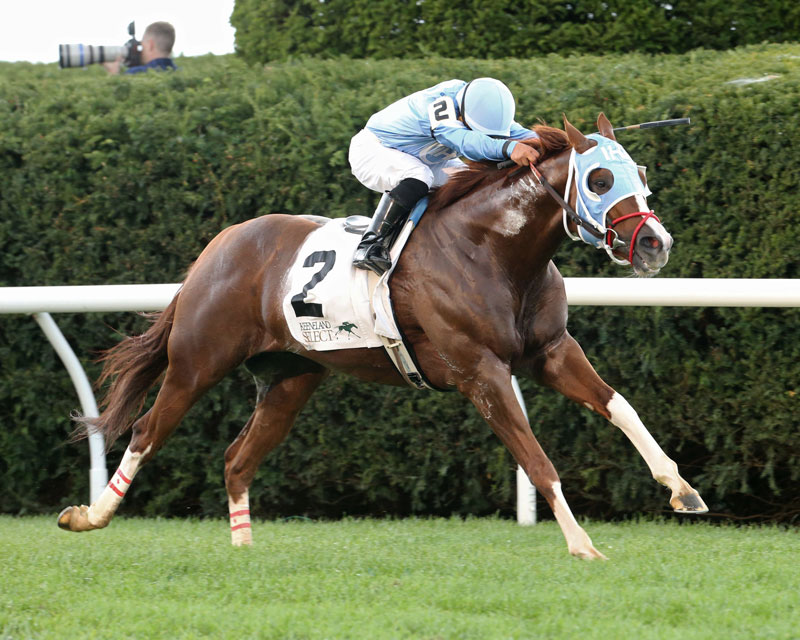 For the first time in program history, two Indiana-breds are pre-entered in the Breeders’ Cup World Championships to be contested at Del Mar Turf Club in Del Mar, Calif., November 3-4.

Bucchero (Kantharos – Meetmeontime, by General Meeting) has been a consistent performer for owners Ironhorse Racing Stable LLC, but the 5-year-old busted onto the national stage with a thrilling victory in the Grade 2 Woodford Stakes at Keeneland Race Course in Lexington, Ky., two weeks ago. While bettors had the chestnut pegged as a longshot at 26-1, Harlan Malter and trainer Tim Glyshaw felt confident going into the race.

“Some people may have seen Bucchero’s win as a fluke, however he has been an excellent turf horse and the Woodford was a target the past two years. I feel the fashion in which he won the Woodford showed he belongs with the top level of turf sprinters,” says Malter.

While Bucchero is Ironhorse’s first Indiana-bred, he’s not their only, as Malter says they are committed to the program. Bucchero has earned a total of $638,366 in lifetime earnings, with an additional $133,870 in Indiana Breeders Awards earnings.

The pretty gray filly was bred by Greg and Deann Baer, owners of Full Throttle Racing in Columbus, Ind. The Baers have been active breeders in the Indiana program since the start. They just happened to be at the OBS Sale sitting behind Doug O’Neill when he purchased the filly.

“I was so excited,” says Deann. “For a little bitty breeder, we always hope they go to the right home.”

The couple is excited to see how Piedi Bianchi turns out as she ages, with Deann stating that she already looks like her dam, Adore You.

“Adore You was a real hard knocking mare, so we think we have a mirror image of her,” she says.

So far, Piedi Bianchi has earned $141,000 in lifetime earnings with a maiden win at Del Mar and placings in two Grade 1 stakes.

“This is a really exciting time for Indiana and for our program,” says Jessica Barnes, Director of Racing and Breed Development for the Indiana Horse Racing Commission. “It shows that our program is growing and we cannot wait to cheer on Bucchero and Piedi Bianchi in November.”