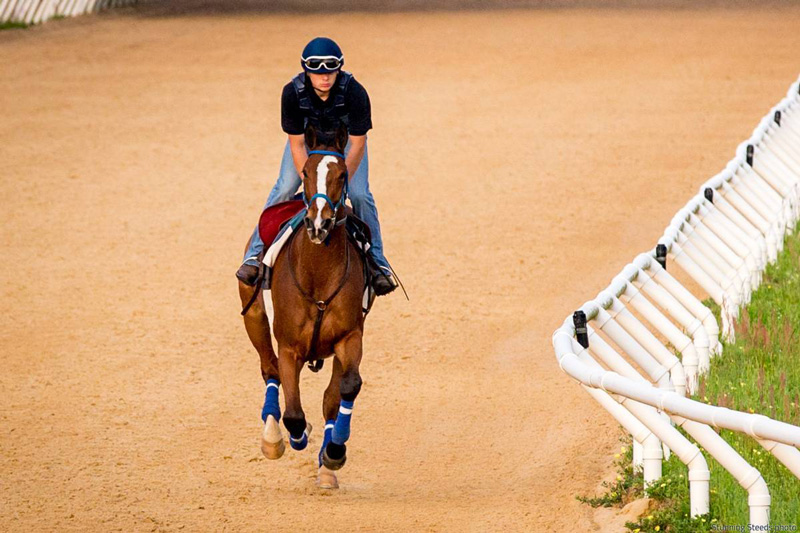 It’s not often you hear of racehorses having a secondary job while still in training and competitively racing, but a handful of Indiana-bred Thoroughbreds are pulling double duty on the track and in the research barn for owner Dr. Joe Pagan, owner of Kentucky Equine Research (KER).

“We have a unique racing program,” says Dr. Pagan. “Kentucky Equine Research is a company that specializes in equine nutrition. We have a large research facility in Kentucky where we conduct studies to improve the way we feed and manage horses and we also own a Thoroughbred training center in Ocala, Fla., where we keep a group of 10-12 racehorses in training. (Our horses) are in full race training and their breeze workouts serve as exercise tests to evaluate how nutrition affects performance and recovery.”

Dr. Pagan purchased his first Indiana-bred—Senor Gato—in 2012 at the Keeneland September Yearling Sale for $11,000. Jody and Anthony Guida bred the Cat Dreams gelding. Under Dr. Pagan’s trainer, Emma Mulvey, he went on to win four of 35 starts and earned $127,500 in lifetime earnings (plus $25,400 in Indiana Breeders’ Incentive Awards for the Guidas). “He was just retired this year and will live out his life as Emma’s pampered pet,” says Dr. Pagan.

While one would think that Kentucky Equine Research would look to locally bred horses for their program, Dr. Pagan knows how to make the most of his budget with regional breeding incentives such as the Indiana Thoroughbred Breed Development Program.

That value has enticed Dr. Pagan to also become a breeder in the program. His first Indiana-sired foal was born earlier this year, by the Swifty Farms stallion Pass Rush (Crown Ambassador – Profitable Knight, by Knight). The mare has since been bred back to Ready’s Image, standing at Midwest Equine & Veterinary Hospital, for a 2019 foal. “I plan to race the foals in Indiana to take advantage of the great Indiana-sired program at Indiana Grand,” says Dr. Pagan. “I picked Pass Rush because I liked how his foals have run in Indiana and he has an A++ TrueNicks rating with my mare,” explains Dr. Pagan. “I bred back to Ready’s Image because my mare is by Mineshaft and the cross of More Than Ready and his sons with AP Indy and his sons have produced some good racehorses.”

While the racehorses participate in many different studies, two recent projects of note focused on recovery after Lasix and bone density in horses entering training.

“These studies took several years and led to the development of Race Recovery, an electrolyte specifically formulated for Lasix-treated horses,” says Erin Ryder Hsu, Director of Marketing for Kentucky Equine Research. “Bob Baffert relies on this product for Justify and other top horses.”

In the bone density project, Hsu explains that the horses were fed different sources of calcium and other minerals to see if one was better utilized by their bodies.

“The results were dramatic—the horses receiving the blend increased their cannon bone density significantly more than the horses given typical sources,” she says. “This led to a supplement product, Triacton, and a feed ingredient, BMC, that’s used by our partners at Hallway Feeds.”

Another study in the works utilizing the Indiana-breds is on how nutrition affects gene expression within the muscle during exercise.

In 2017, Dr. Pagan acquired Country Minister, an 8-year-old gelding bred by Swifty Farms (Evil Minister – Country Way, by Giant’s Causeway). The bay workhorse has earned more than $408,000 in lifetime earnings. “He has remained incredibly sound and his jockey remarked after a recent breeze that he moved more like a 2-year-old than an older horse,” says Dr. Pagan. “He will continue to race as long as he is competitive, healthy and happy, then we will see if he is suited for a second career as a sport horse.”

“It’s great that horses from our program are at the center of landmark nutritional research,” says Jessica Barnes, Director of Racing and Breed Development for the Indiana Horse Racing Commission.

More notes and information on the studies conducted by Kentucky Equine Research aimed towards racehorses can be found by contacting Hsu at ehsu@ker.com.