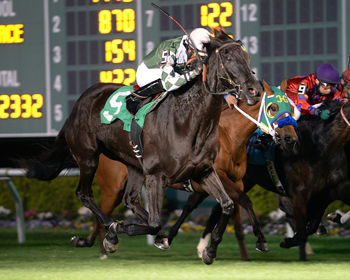 Rose Mary Chandler’s homebred I Am Jane Dough came from off the pace to win Saturday’s feature at Sam Houston Race Park, the $50,000 Tomball Distaff for accredited Texas-bred fillies and mares. The 4-year-old filly is trained by Danny Pish and was ridden to victory by Deshawn Parker.

The field of nine included five stakes winners led by Expect Royalty, winner of the $50,000 San Jacinto Stakes at Sam Houston on opening night. It proved to be a coming out party for I Am Jane Dough, who earned the first stakes win of her career. She ran third in the Fiesta Mile at Retama Park and second in the San Jacinto, but tonight, put it all together under a well-timed ride by Parker. This is just the second year that the 44-year-old has ridden in Houston. He is currently the leading rider at the track and picked up his first stakes Sam Houston stakes win in the Tomball.

Parker expressed his gratitude to Pish and admiration for the 4-year-old daughter of Valor Farm stallion My Golden Song, who sat off the early pace, rallying five wide and crossing the wire a half-length ahead of Joey Keith Davis’ Molly’s Honour.

“Danny just told me to let her do what she wanted for the first part of the race,” said Parker. “She has tactical speed and could go to the front or make that late sweeping run. I just let her settle and when I called on her, she gave me all she had. I definitely appreciate Danny giving me the chance to ride the filly.”

Pish saddled three winners on the Saturday night card and liked the progression of his filly.

“She’s coming together and her win tonight reflected her seasoning,” commented Pish. “Sometimes those big, gangly runners take a little longer to get it together.”

I Am Jane Dough covered the distance of a mile and one-sixteenth over the Connally Turf Course in 1:44.67 and returned $6.00 as the second choice in the nine-horse field. Molly’s Honour, who went out to the lead under Martin Escobar, held on for second. There was a dead-heat for third between Expect Royalty and defending champion, Wampas Kitty.

Pish was uncertain regarding the next start for his winning filly.

“Quite frankly, I haven’t thought that far ahead,” said Pish. “I’m thrilled with tonight’s performance and we’ll evaluate tomorrow and decide where to go from here.”