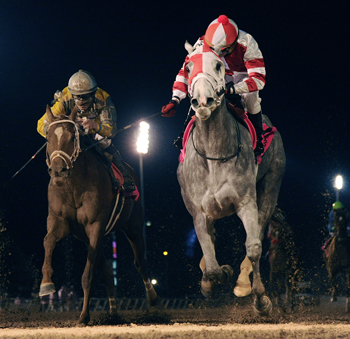 Under a confident ride by her regular rider Kerwin Clark, the daughter of Tapit out of the Giant’s Causeway mare Justenufftime defeated seven rivals en route to her third consecutive stakes victory. Breaking from the far outside post, Cassatt broke sharply and went immediately to the lead, covering fractions of :24.29; 47.85; 1:11.91 and holding off a huge late run from Angelica Zapata. Cassatt held on by a neck and the final time of the mile and one-sixteenth stakes over a fast main track was 1:44.96. Sent off as the prohibitive favorite, Cassatt paid $3.40, $2.40 and $2.20 to her supporters.

This was the third stakes in a row for the striking grey filly. Following the Zia Oaks victory, she added a second stakes win on December 21, taking the Tiffany Lass at Fair Grounds. Bred in Kentucky by Mt Brilliant Farm, Cassatt’s record stands at six wins from nine starts. The winner’s share of $232,800 from the Houston Ladies Classic vaulted her career earnings of $603,033.

“I was glad to see the wire hurry up and get there because they went pretty quick,” commented Jones. “They made a race out of it. She’s a classy filly and just now starting to get the hang of it.”

Jones has been patient with Cassatt ,acknowledging that she is a late-developing filly, very similar to Joyful Victory

“We had a weird start to her career; had to do a lot of jumping around,” said Jones. “But now we’re getting in a good rhythm. She got a little nervous tonight; she’s getting better, but still had those cotton picking nerves!”

Jones will take the same route with Cassatt as he did in 2013 with Joyful Victory, pointing to the Grade 1 Santa Margarita at Santa Anita.

“If we get another Grade 1 winner out of this race it will make Sam Houston look good!”

Angelica Zapata, a daughter of Sharp Humor, made her first trip to Sam Houston Race Park one to remember. Jockey Juan C. Leyva asked his mare for one last surge and she almost caught the winner.

“We needed two more jumps and she would have had it,” said trainer Ron Pelligrini. “She’s a game mare and always gives her best.”

Her effort was a bittersweet for Pelligrini and owner Herman Van den Broeck, who bred her in partnership with Buck Pond Farm Inc.

Pelligrini said the decision was made before the Houston Ladies Classic to send the 7-year-old mare to Keeneland for the February 9th sale.

“That was her last race, unless she does not meet her reserve,” explained Pelligrini.

The Houston Ladies Classic was the first stakes of the 2015 Penn Gaming Racing Challenge. The national program will incorporate over 20 stakes races worth over $5.5 million. The stakes will take place at Hollywood Casino at Charles Town Races, Hollywood Casino at Penn National Race Course, Sam Houston Race Park, and Zia Park. The Challenge includes tie-ins between groups of races in the series, as well as bonuses and prizes that include free nominations, refund of entry and starter fees, and trips to the PNGI owned M Resort in Las Vegas.

Coalport, a 6-year-old son of Kitten’s Joy, is owned and bred by Kenneth and Sarah Ramsey, who were honored both as champion breeder and owner in last weekend’s Eclipse Awards. Coalport shipped into Sam Houston Race Park off a two-race win streak; his most recent was the Bucks Boy at Hawthorne on November 15.

Under rider Miguel Mena, who subbed for Javier Castellano, Coalport took the lead and had command throughout the nine furlong stakes, finishing 3 ¼ lengths ahead of Trace Creek.  The final time, over the firm Connally turf course, was 1:49.00.

Maker, who is based at Gulfstream Park, watched the race from Florida, and was very pleased with the fourth win a row from Coalport.

“I thought he would be forwardly placed,” said Maker. “With Javier staying here, I knew I had a top rider in Miguel. Sam Houston has a very fine turf course and we really enjoy shipping there.”

“He gave me everything he had: 110%,” said Landeros. “I thought Coalport opened up too much. I knew he was a classy horse and could kick away. But I didn’t want to do too much; I wish I had a little more pace up front. He ran big.”

Coalport returned $3.80 as the favorite in the eight horse field. He improved his lifetime record to five wins from 10 starts, and earned $115,200 for his first graded stakes victory.

Maker had no immediate comment on the next start for Coalport, simply stating that “everything is on the table”.

Heitai Shows His Class in the $75,000 Frontier Utilities Turf Sprint
Tom Amoss won last year’s edition of this stakes with Sum Of The Parts for Klaravich Stables LLC and William H.  Lawrence. The intrepid turf sprinter has been retired to stud, but Amoss has another capable contender in Heitai.

The 5-year-old son of Fusaichi Pegasus is owned and bred by Rowell Enterprises Inc. and made the 27th start of his career this evening. Breaking from post position three, Heitai made the early lead and was never challenged, taking the five furlong sprint in :56.76.

“He won pretty convincingly,” said winning rider James Graham. “He’s pretty fast by himself; even faster with me on him!”

Amoss recently assumed training duties of Heitai and has only had the Louisiana-bred sprinter in his barn for three weeks, but clearly he liked what he saw tonight.

“He’s brilliantly fast,” said Amoss.  “Maybe one nervous moment when he left the gate as he had to work a little to make the lead. But he ran really well,”

Next up might be a Louisiana-bred stakes at Delta and then Amoss is considering shipping Heitai to Churchill Downs.

“The turf sprint on Derby day is a possibility,” he added. “That would be a real flattering race to win.”

The son of Medaglio d ‘Oro broke his maiden on January 4 at Fair Grounds by an impressive eight lengths and proved he was a stakes-caliber 3-year-old in a gate-to-wire romp.

“He’s a nice colt and Larry had him ready tonight,” said Clark.

We think he’s pretty special,” admitted Jones. “He’s a half to Cross Traffic and his mother is a Grade 1 winner. He went pretty quickly, but we knew Al (stall’s) horse was pretty fast. We figured with the outside post, we’d be okay. He was rolling”

Columbine Stable LLC’s Waging War, was in pursuit of the winner, tracking the first quarter-mile in a blazing 21.96 and 44.92 for the half-mile.

Forest Boyce made her Sam Houston riding debut and ran a game second aboard Waging War.

“My horse ran great; he handled the inside post really well,” said Boyce. “I think he will excel stretching out in the future.”

Exodus, returned $2.80 on a night belonging to heavy betting favorites, winning the seven-furlong main track event in 1:24.32. He earned $30,000 for his first stakes win. Bagpipes held for third over Clock Me Now.