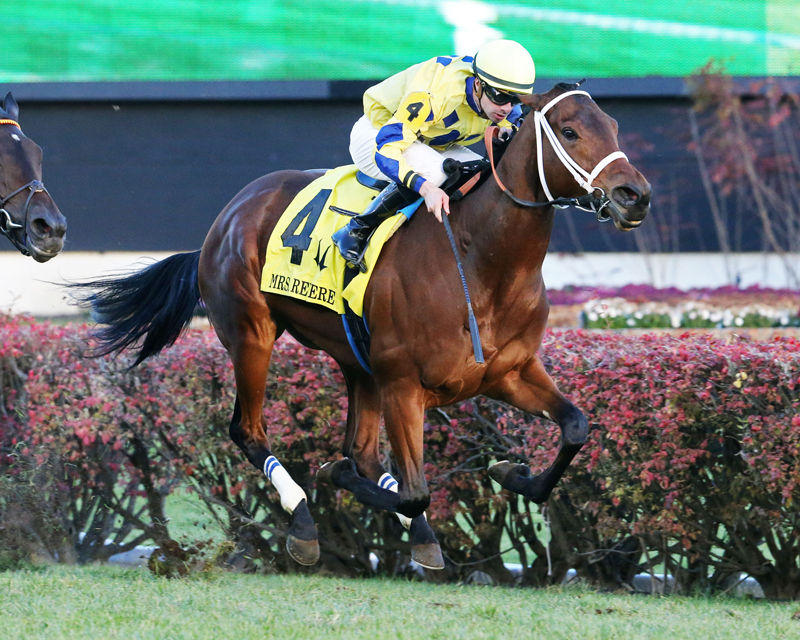 James M. Miller’s Lovely Bernadette, a Kentucky-bred daughter of leading Oklahoma stallion Wilburn, sat just behind longshot pacesetter Marina’s Legacy, grabbed the lead midway around the far turn and repelled late challenges down the stretch to win the 27th running of the Grade 2, $200,000 Mrs. Revere at Churchill Downs by a half-length over Maryland invader Journey Home. Daddys Lil Darling, the even-money favorite, was another neck back in third.

The Mrs. Revere – the penultimate North American graded stakes race of the year for 3-year-old fillies on grass – was one of three stakes races on a 12-race “Black Friday” program at Churchill Downs. Also on the card topped by the 143rd running of the $500,000 Clark Handicap Presented by Norton Healthcare (G1, Hailstorm Slew upset Ivy Bell in the 13th running of the $79,382 Dream Supreme Overnight Stakes.

Marina’s Legacy made the early running and led the field through fractions of :24.55 and :50.92 as Lovely Bernadette raced in close pursuit from the outside in second. Lovely Bernadette pulled herself to the lead on the turn, passed the six-furlong marker in 1:16.70 and spurted clear at the top of the stretch. Journey Home and Daddys Lil Darling rallied from behind but could not catch Lovely Bernadette in the final stages.

“This filly has so much tactical speed I was able to sit a perfect trip,” Geroux said. “She felt like she had plenty left turning for home when the horses caught up to us. I think since we went slower on the backstretch that she was able to get a breather before turning for home. Jimmy has done such a great job with this filly throughout her career. She’s capable of winning a Grade 1 next year.”

Last fall, Lovely Bernadette won the $82,340 Rags to Riches Overnight Stakes at Churchill Downs before four subsequent failed runs in dirt stakes. She debuted on turf at Churchill Downs in June and beat older rivals by 1 ½ lengths. Grass has been her preferred since that win.

“The sky is the limit for this horse,” DiVito said. “She’s shown us how talented she is on the grass and I think she’ll just keep getting better with age.”

Lovely Bernadette is a bay daughter of Wilburn out of the Bernstein mare Inloveiwthlove who was bred in Kentucky by David E. Hager II. Wilburn stands at River Oaks Thoroughbreds in Oklahoma.

The Mrs. Revere is named in honor of Mrs. Revere, an accomplished Churchill Downs fan favorite in the mid-1980s. Mrs. Revere won 12 races in 28 starts, finished second seven times and earned $429,545 for Hall of Fame trainer Bill Mott. Her six wins in a dozen starts at Churchill Downs included stakes triumphs in the Regret, Dogwood and Edgewood in 1984 and the Kentucky Cardinal in 1985. She was owned by Drs. David Richardson and Hiram Polk, who have provided the winner’s trophy for the Mrs. Revere in each year of its existence.

One race later in the Dream Supreme, 12-1 outsider Hailstorm Slew, bred, owned and trained by C.R. Trout, grabbed the lead at the top of the stretch under Jon Court and turned back a late challenge by 8-5 favorite Ivy Bell to win by 1 ¼ lengths while clocking six furlongs over a fast track in 1:09.56. The Oklahoma-bred daughter of Munnings paid $27.80 in the field of nine fillies and mares and banked $46,009. Overall, she has won seven of 17 starts and $325,807.

“This horse has been coming along slowly, and that was mostly my fault,” Trout said. “She’s really started to figure things out lately. It’s very special to win a race when you watch a horse like this grow up. We had a Shotgun Kowboy in the River City Handicap yesterday [note: he finished 11th] and thought she deserved a try in this race so she made the van ride with him. I’m glad the trip from Oklahoma paid off.”