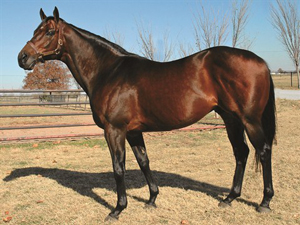 Will Rogers Downs presented two divisions of the Oklahoma Stallion Stakes for 3-year-olds on Kentucky Derby Day, May 4, and progeny of stallions standing at Oklahoma Equine swept the exacta in the fillies race. In the one-mile affair contested over a sloppy track, Hard Cider enjoyed a stalking trip under jockey Garrett Steinberg and then seized command in the stretch to draw clear by 3 ½ lengths. The daughter of Liquor Cabinet (Ire), who became her sire’s first stakes winner, stopped the timer at 1:41.40.

Bred and owned by 7 Cedars Farm and trained by Clinton Stuart, Hard Cider appears to be finding her stride as a 3-year-old. It took the Oklahoma-bred eight tries to break her maiden, but she did it in style with an 8 ½-length romp on April 9 at Will Rogers. That set her up for another big win in the Stallion Stakes, and now her record stands at 9-2-1-1 with earnings of $58,447. She is out of the Oklahoma-bred mare Alley’s Account, by Alamocitos.

Liquor Cabinet, who was last year’s leading freshman sire in Oklahoma, has jumped out to the early lead on the state’s second-crop list this year. The Hennessy stallion ran first or second in 10 of his 12 career starts, including a win in the Grade 3 Aqueduct Handicap in New York. Hard Cider is one of 34 foals in his first crop to reach the track.

Circle S Ranch Inc.’s homebred Mari’s Big Rock, a daughter of Oklahoma Equine stallion Diamond, set the early pace and held on to finish a clear second. The filly is still a maiden but has hit the board in five of seven starts with earnings of $29,828. Cody Worst rode her for trainer Tim Williams.

Lady Bison (by Burbank) and Pippa Okie (by Cavvy) completed the field.