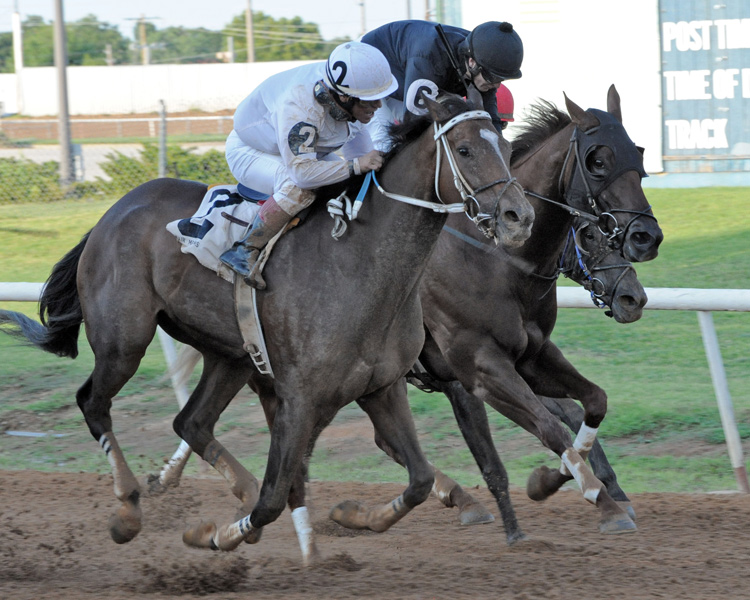 Oklahoma-breds were featured in two Thoroughbred stakes on Saturday at Fair Meadows in Tulsa, and the winners were a proven veteran and an emerging star.

In the $45,000 Route 66 Stakes at 6 ½ furlongs, George W. Straw Jr.’s Johnny Whip picked up his first victory of the year but 15th win of his career. The 7-year-old gelding by Stephen Got Even had hit the board in three other stakes this year before breaking through to win with Benny Landeros up for trainer Jody Pruitt. This marked the third year in a row for Johnny Whip to take the Route 66 at Fair Meadows, and his career record now stands at 58-15-12-9 with earnings of $466,779. Johnny Whip, who was bred by Robert Zoellner, was clocked in 1:20.20.

B and S Racing’s From Out There, by Affirmatif, took second with Center Hills Farms’ Kips Hog Wild, by Kipling, in third.

In the $45,000 Muscogee (Creek) Nation Stakes for fillies and mares, Robbin Caldwell’s Goodheartedgirl picked up her second stakes victory of the year with a 3 ½-length score under jockey David Cabrera. The daughter of Oklahoma stallion Ellerton stopped the timer at 1:14.00 for six furlongs and earned $26,838 for the win. The 4-year-old filly, who spent much of her early career in the claiming ranks, is enjoying a strong season this year with three wins and two seconds in six starts, including a win in the Cherokee Casino Will Rogers Downs Classic Distaff Sprint. All told, she has won seven of 18 starts with earnings of $149,439. She was bred by Chuck Bowlan and is trained by Tana Caldwell. Goodheartedgirl’s sire Ellerton, a son of Silver Deputy, stood the 2016 breeding season at Rockin BB Ranch in Tecumseh, Oklahoma, as property of Danny Caldwell and Bobby Edwards.

Oh My Goodness, a daughter of Lucky Lionel owned and trained by Patrick Swan, finished a clear second with Jerry Lambert’s Frances is Smokin, by Still be Smokin’, in third.