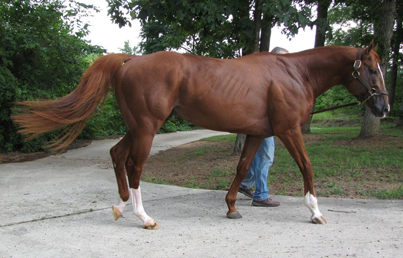 Alabama stallion Sky Hollister’s first starter also became his first winner when his daughter Mrs Peacock won a maiden special weight contest at Mountaineer Park on March 31. Not only was it the first winner for the stallion, but the filly is the first horse bred and owned by Dr. Vincent and Gemma Ziegler’s Rags to Riches Racing Stable. The 3-year-old Mrs Peacock, who was foaled in Kentucky out of the Cape Canaveral mare Miss Rocket Jag, won by a length with Rolando Aragon riding for trainer Matt Hebert.

Sky Hollister is a son of Sky Mesa who stands at Carl and Daryl Tuttle’s Trinity Thoroughbreds in Falkville, Alabama. Although unraced due to injury, Sky Hollister showed considerable promise as a racehorse when he sold as a Keeneland weanling for $140,000 and then $235,000 as an OBS 2-year-old after posting a :10 1/5 work. Sky Hollister’s dam is the Unbridled’s Song mare Littlebigthing, who is out of a half sister to Horse of the Year Holly Bull.

In other Alabama stallion news, the state’s perennial leading stallion Smart Guy was euthanized in March. Also standing at Trinity Thoroughbreds, the 19-year-old son of Smarten won the 1999 Pennsylvania Derby (G3). Among his offspring is multiple stakes winner and $570,711 earner Secretintelligence.

For more information about Sky Hollister, go to www.trinitythoroughbreds.com.