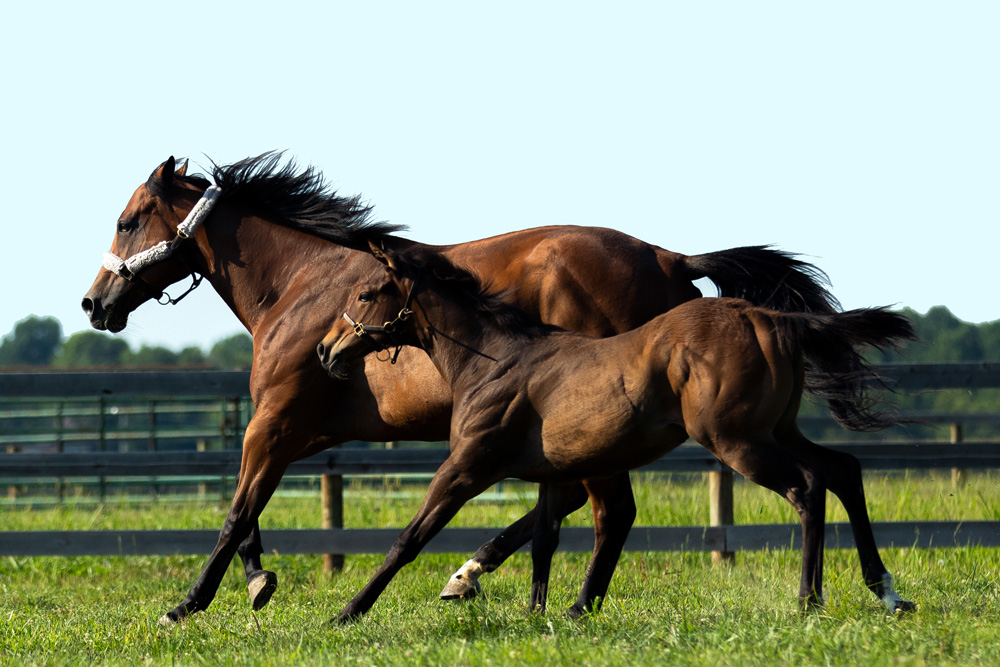 Eclipse Award winning stallion Runhappy (Super Saver – Bella Jolie) has created many fans across the country, including Indiana. His name has been synonymous with horse racing in Kentucky and New York, and soon it’ll start to be in Indiana. Two foals from his 2019 crop were born in Indiana and registered with the Indiana Thoroughbred Breed Development Program, a regional breeding incentive program Runhappy’s connections are excited to a part of.

The 2015 Breeders’ Cup Sprint Champion earned more than $1.4 million in his three year career, including the Grade 1 King’s Bishop Stakes and Malibu Stakes for owner Jim McIngvale. His name is plastered all over historic Saratoga Springs, New York, as the title sponsor of the Gr. 1 Travers Stakes, but Hoosiers might start to see his name more in Indiana.

“We started running our horses at Indiana Grand last year,” explains trainer Laura Wohlers. “We made some money and had a good time.”

Wohlers’ love of the Shelbyville track grew as they enjoyed the convenient ship-in process, since her string is based out of the Thoroughbred Training Center in Lexington, Ky. “We just think Indiana Grand’s receiving barn is probably the best we’ve been to,” she says.

The success discovered in 2018 led to Wohlers and McIngvale looking at partaking in the lucrative breeders’ incentive program. Wohlers discussed with the owner known best as “Mack” about the program, and they chose a few mares for their first foray into the Hoosier State.

“I asked some friends in Lexington where they would go if they were to have a foal in Indiana. I was connected to Christina Cagle of Springcliff Farm in Martinsville, and we’ve loved every minute of the experience,” Wohlers says. “We checked out her farm and all of her horses look good and you can tell she takes great care of them.”

Because Wohlers brought three mares into the state after the November 1 deadline, she was required to breed them back to a registered Indiana stallion so their 2019 foals could be registered as Indianabred. Wohlers worked alongside Cagle to choose the best fit in Indiana, choosing Greeley’s Conquest (Breakway Farm) and Forever d’Oro (Hidden Springs Farm).

“We didn’t mind the breed-back requirement because we know that 90 percent of state programs have that same rule,” Wohlers comments. “If you have a good breeders awards program, which Indiana does, it’s not too difficult to find the best fitting stallion. We have foals now in Louisiana, Kentucky, Maryland and Indiana. I think the state programs are something that people are looking more and more to now. I think that there is always that perception that the best horses are all in Kentucky and you need to by a Kentucky-bred. But there really isn’t much of a Kentucky breeder incentive program available.”

Breeders of registered Indiana-breds can earn 20 percent of the gross purse for all stake, allowance and claiming races when racing at Indiana Grand Racing and Casino. If the Indiana-bred wins a race in another state, Puerto Rico or Canada, the breeder earns 10 percent of the winner’s share of the purse when there is no live Thoroughbred meet in progress in Indiana and for 2-year-olds winning out of state prior to July 1 (except for stakes races). (Incentives are paid for races where the claiming price is more than $10,000.)

“The purses are good in Indiana to begin with, and when you add the Indiana program’s money, I told Mack you could make some good money with your horses,” she continues. “If you’ve got a $30,000 purse, you’re really running for $40,000 with the added incentives. And, with the changes coming to the racinos with table games, the purses will end up being even higher. The money is going to drive people—look at the changes Oaklawn has undergone in the past ten years!”

One of the things that also intrigued the Runhappy connections to the Indiana program was that not only does Indiana pay a 40 percent purse supplement money to the open races for the Indiana-breds that are able to run there, but then you also add a 20 percent Breeders Award. “Which is very respectful,” Wohlers says. “Then the program also offers 10 percent award for out of state stakes for when the meet is not live in Indiana. This allows you to continue to run your horses all year, and you can run them in other spots if the need be. Some of the state programs don’t benefit you when you’re outside their race meets.”

Runhappy earned his first win of his three year old campaign in Indiana, starting back after an injury at two, so his foals’ participation in the state is a full circle moment. He now stands at Claiborne Farm in Paris, Ky., for $25,000, covering a full book of 135 mares in 2019. “He’s been doing pretty well. It’s not hard to get him booked,” Wohlers says. “He’s really throwing some pretty babies. Hopefully they’ll run as well as he did.”

Breeders looking to participate in the Indiana Thoroughbred Breed Development Program and earn the Breeders’ Incentives must have their mares registered and in residence of the state by November 1 of the year prior to foaling. Stallions looking to stand in Indiana must be in the state and registered by October 15 of the year prior to breeding season. More information can be found on the program’s website (http://in.gov/hrc) or by calling the IHRC at 317-234-2542.