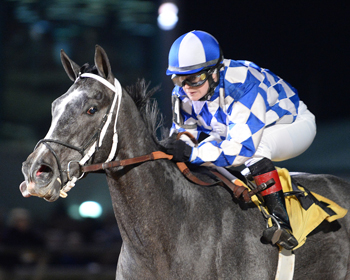 Three exciting finishes took place at Sam Houston Race Park on Saturday night in both divisions of the Texas Stallion Stakes as well as the $50,000 Jersey Village Stakes.

In the $75,000 Two Altazano division of the Texas Stallion Stakes for 3-year-old fillies, all eyes were on Fiftyshadesofgold as she made her return to action following an injury last August in the Grade 2 Adirondack Stakes at Saratoga. The Clarence Scharbauer Jr. homebred had been training exceptionally well at Fair Grounds Race Course for trainer Bret Calhoun, and she left the gates as the 2-5 prohibitive betting choice. She did not disappoint her backers, as jockey Rosie Napravnik tracked Calhoun’s other entrant, Scooter’s Choice, and then drew clear by 2 ½ lengths.

“She actually took a while to get going, but Bret did a great job bringing her back off the layoff,” said Napravnik. “I think she’ll be even better going long.”

Calhoun had been looking for a comeback spot for the lanky, gray Texas-bred filly, who drilled four bullet works at Fair Grounds in preparation for race.

“It was perfect,” said Calhoun. “That’s the way we drew it up, sitting off the pace and finishing like that. She had trained very well, but in the back of your mind you are always worried how she would come back off an injury like that. I think she proved she’s back.”

Calhoun was proud of the runner-up effort of Wayne Sanders and Larry Hirsch’s Scooter’s Choice, a daughter of Lane’s End Texas stallion Too Much Bling who was sent to the lead under Lindey Wade.

“She ran a great race,” said the conditioner. “When she came off the turn, I thought Fiftyshadesofgold might have a hard time catching her.”

Napravnik has had a very successful run at Sam Houston Race Park, winning the 2012 Connally Turf Cup, the 2013 Houston Ladies Classic and twice breaking the track record in the Champion Energy Service Stakes.

Fiftyshadesofgold ($2.80), whose sire My Golden Song stands at Scharbauer’s Valor Farm near Pilot Point, Texas, covered seven furlongs over a fast track in 1:23.13. Tom Durant’s homebred Forever Since, by Supreme Cat, ran third under Gerardo Mora and Swifterthantaylor, with Larry Taylor in the irons, rallied for fourth.

Calhoun indicated that Fiftyshadesofgold, who earned $45,000 this evening, will be pointed to “one of the bigger stakes at Fair Grounds or Oaklawn Park” with the Grade 1 Kentucky Oaks at Churchill Downs as her goal.

The $75,000 Jim’s Orbit division of the Texas Stallion Stakes for 3-year-old colts and geldings also produced a memorable finish for the same owner and trainer with a nicer price on the toteboard as Ibaka came flying from off the pace under Napravnik and paid $13.60 for the win. Owned and bred in Oklahoma by Doug Wall, Ibaka had prepped for the Jim’s Orbit with an allowance victory on January 10 at Delta Downs.

“He broke poorly (in the Texas Stallion Stakes) at Retama, and the race was over,” said Calhoun. “He came back well at Delta, which we thought would set him up well for this. The race didn’t unfold the way we thought. He got shuffled back, but finished well in the end.”

Wall had a group of family and friends who donned “Ibaka” t-shirts and celebrated enthusiastically after the first stakes win by the son of Uncle Abbie.

“I bred him, raised him and fed him every meal until I turned him over to Mr. Calhoun in August,” said Wall. “When he lost at Retama, we thought the world had ended, but tonight we are so happy. This horse is representing not only us, but the Oklahoma Thunder.”

Texas-bred F J Uncle Vic ran second, following his convincing score against open company in the $50,000 Allen’s Landing Stakes at Sam Houston on January 25 for Johnny Evans and Terry Eoff, who also trains the runner. F J Uncle Vic is also by Uncle Abbie, and who stands at Joe Kerby’s Key Ranch near Salado, Texas, and gave the Kingmambo stallion a sweep of the exacta. Ibaka improved his record to 5-3-0-1 with earnings of $87,036, while F J Uncle Vic has a record of 10-2-4-1 with earnings of $82,430

“My horse was running well, but had a lot of pressure and just got tired,” said rider Ernesto Valdez Jiminez.

The third stakes of the Saturday evening card was the $50,000 Jersey Village Stakes with a field of 10 accredited Texas-breds competing at a mile and one-sixteenth over the Connally Turf Course.

Danny Pish, 2013 Sam Houston Race Park leading trainer, had to sweat out a photo finish between the late charge of his homebred Quiet Acceleration and a huge effort from Fly the Red Eye. The head bob went to Quiet Acceleration, with Gerardo Mora in the irons.

The intrepid turf specialist returned to the Connally Turf Course off his victory in the $50,000 Richard King Stakes last month. Tonight the 5-year-old son of Silent Picture notched his ninth turf win from 28 starts.

“He is a very reliable horse who shows up every time and we are so proud of him,” said Pish. “A horse likes this keeps a fool in the business. I claimed his sire and his dam and that’s not supposed to produce a multiple stakes winner.”

Jockey Glen Murphy had praise for Fly the Red Eye, the 6-year-old year-old son of Early Flyer who is owned by H and H Ranch.

“He ran a beautiful race,” said Murphy. “He got around the course very well; just lost the bob. They were both fighting hard to the end.”

Quiet Acceleration was sent off at odds of 4.70-1 in the 10-horse field and returned $11.40 for the win. Valid Message closed for third and Special U F O, also trained by Pish, faded to fourth.