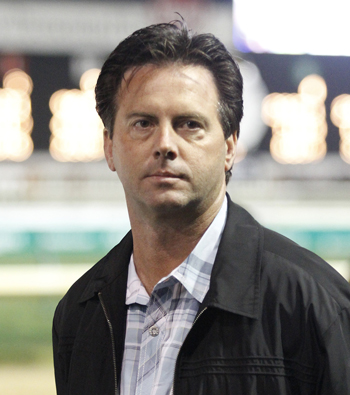 Brereton Jones’s Proud Spell, one of five fillies of recent vintage to have parlayed a win in the Fair Grounds Oaks to one in the Kentucky Oaks later in the spring, will be joined by Crescent City-based trainers Bret Calhoun and Larry Robideaux Jr. when all three are inducted into the Fair Grounds Hall of Fame during ceremonies to be held March 12 at Fair Grounds Race Course & Slots.

Proud Spell, a Kentucky homebred daughter of Proud Citizen, accomplished her “Oaks Double” in 2008, the year before Dolphus Morrison’s Rachel Alexandra did the same thing on her way to eventual Horse of the Year honors.

“We and I were absolutely ecstatic when they told us,” said Proud Spell’s trainer Larry Jones when asked about his and his wife Cindy’s reaction. “When we called ‘Brere’ and told him and Libby (Brereton Jones’s wife), they were just tickled pink. They are really excited and are making plans to be here for the ceremony.”

Calhoun, 49, born in Dallas, Texas, but now a resident of New Orleans, has been training horses for two decades. The highlight of his career to date was winning two Breeders’ Cup races in 2010 – the Grade 1 Breeders’ Cup Filly & Mare Sprint with Martin Racing Stable and Dan Morgan’s Dubai Majesty as well as the Grade 2 Breeders’ Cup Turf Sprint with Carl Moore’s Chamberlain Bridge.

“To tell the truth, I never even thought about this until they told me,” said Calhoun. “I was really surprised and shocked. Obviously, it’s a great honor. When I look at the list of trainers already in there, all I can say is that I’ll be joining some really great people and some really great horsemen.”

Robideaux, 80, born in Iowa, Louisiana, saddled his first horse at Fair Grounds in 1961 and his last one in 2012. The highlight of his career came when he saddled Ben Castleman’s My Charmer to win the 1972 Fair Grounds Oaks. My Charmer went on to be famous as the dam of 1977 Triple Crown winner Seattle Slew.

Fair Grounds Hall of Fame induction ceremonies will be held in the Black Gold Room in the Derby Building above the Racing Office shortly after the racing program on March 12.

Also, three longtime veterans of the New Orleans press corps, previously announced, will be inducted into Fair Grounds Press Box Hall of Fame during the ceremonies. They are Glenn Gremillion, who ran the Fair Grounds television department for many years, A. J. Paretti, who called the charts at Fair Grounds for Daily Racing Form and later for Equibase, and longtime track photographer Lou Hodges Jr., who will be joining his late track photographer father Lou Hodges Sr. in the Press Box Hall of Fame.