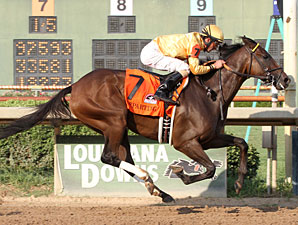 A field of eight 3-year-olds entered the Grade 3, $400,000 Oklahoma Derby this morning in the Remington Park racing office. Departing, a three-time derby winner and earner of more than $1.3 million drew the outside post.

Owned by historic Claiborne Farm of Paris, Ky. and Adele Dilschneider of St. Louis, Departing is trained by Al Stall, Jr. Remington Park odds-maker Jerry Shottenkirk made Departing the 6-5 morning-line favorite as the gelding comes into the Oklahoma Derby with an impressive resume.

“Departing has been well spotted on several occasions and is as tough as they come on a Grade 2 and Grade 3 level. His last two wins, in the West Virginia Derby by 8 3/4 lengths and the Super Derby by four lengths, place him firmly in the favorite’s role here,” Shottenkirk emphasized. “His only blemish was a sixth in the Preakness and that’s certainly a forgivable offense.”

Robby Albarado has been aboard Departing for his West Virginia and Super Derby triumphs, and will keep the mount for Sunday’s Oklahoma Derby.

Departing has won three graded derbies but is not the only winner of such a race entered in the Oklahoma Derby. Broadway Empire captured the Grade 3, Canadian Derby at Northlands Park in Edmonton, Alberta and has been made the 4-1 second choice in the morning line.

“Broadway Empire just might be the most interesting combatant here,” Shottenkirk noted. “He broke his maiden by 16- ½ lengths in 1:07.84 for six furlongs at Turf Paradise, was runner-up to the ultra-quick Let Em Shine in the Came Home at Betfair Hollywood Park and then shipped up to Canada, where he easily handled his competition. He’s the real deal and can go about as far as they want him to early in the game.”

Owned by the Alberta partnership of Randy Howg, Bob Butz, Fouad El Kardy and Rick Running, Broadway Empire is stabled in the Remington Park stakes barn and has had nearly a week to acclimate to his surroundings. Trained by Robertino Diodoro, Broadway Empire will be ridden by Rico Walcott, who handled him in the Canadian Derby.

Cameo Appearance is the third-choice in the morning line at 9-2 odds, after running third behind Departing in the Super Derby. Owned by Gary and Mary West of Omaha, Neb. and trained by Wayne Catalano, Cameo Appearance will be ridden by Remington Park-based jockey Luis Quinonez.

Texas Bling, the 128-1 upset winner of the 2012 Springboard Mile at Remington Park, will try to become just the third horse to win the Springboard, followed by an Oklahoma Derby win the next year.

Texas Bling has not competed since an eighth-place run in the Grade 1, Arkansas Derby at Oaklawn Park in Hot Springs in April. He has trained well in recent weeks, leading to the Oklahoma Derby. Owned by Hall’s Family Trust of Fort Worth, Texas and trained by Danele Durham, Texas Bling is part of a same-owner coupled entry with He Has Bling. Texas Bling will leave the Oklahoma Derby starting gate from post-position one, while He Has Bling will leave from post-position four.

The field for the Grade 3, $400,000 Oklahoma Derby with trainer, jockey and morning-line odds, by program and saddle-towel order:

The Oklahoma Derby is race nine of 10 on Sunday. The first race on the program is at 1:30pm with the Derby slated for 5:14pm.

Remington Park racing will be conducted on Thursday thru Sunday this week, Sept. 26-29. The first race is at 7pm nightly except for the special Sunday afternoon program when the Oklahoma Derby card starts at 1:30pm.