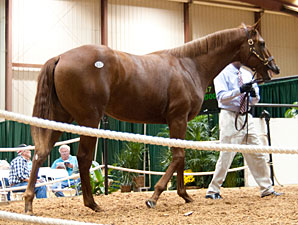 Consigned by Pelican State Thoroughbreds, the colt had lots of interest the days leading up to the sale as well as the morning of the sale. Coteau Grove Farms owner, Keith Myers, reported that he received phone calls from all over the United States once the catalog was published.

“We had lots of new traffic this year,” said Daren English, sales director for the Breeders Sales Company of Louisiana Inc., a wholly owned subsidiary of the Louisiana Thoroughbred Breeders Association. “Buyers showed up from Kentucky, Florida, Texas, Oklahoma, Missouri and more. We worked hard to make sure that our consignors had a good audience for the sale.”

“I told several people when the catalog was published that we had ‘broodmare power,’” said English. “The sale topper and several other acquisitions seem to point in that direction.”

Coteau Grove Farms LLC bought Clear Sailing from the Overbrook Farm dispersal. Clear Sailing is out of the Old Trieste mare Steady Course, who is a half-sister to Grade 2 winner and former Overbrook sire Jump Start. Clear Sailing was a $190,000 buy-back at Keeneland’s September yearling sale and finished third in her only start, a maiden event at Churchill Downs the year prior to this sale.

After routing her rivals in a sprint against maidens in late December 2009 at Fair Grounds, Clear Sailing was up to the challenge of her first stakes race in February 2010, winning the Pelleteri at the Fair Grounds with a strong stretch run. After suffering a career ending injury later that year, she was retired to Coteau Grove Farms and bred to Awesome Again in early 2011. The sale topper colt is her first foal.

“We are pleased for our consignors and breeders,” said Roger Heitzmann, secretary/treasurer for the Louisiana Thoroughbred Breeders Association and executive director for the sale.

The bonus paid will be added to the earnings of the winning horse and paid to the owner of the horse after the official completion of the final race. Sittin At The Bar, a 2011 sales graduate, was the first ever to win either division.

“This sale is an indication of the popularity of Louisiana-breds and a credit to our breeders. We had a big audience at the sale and online through our webcast. The sales staff did a great job organizing and running the sale. This has been one of our best sales,” added Heitzmann.

Valene Farms picked up a Half Ours filly by Elegant Designer for $45,000. Murray Valene is longtime supporter of the Louisiana-bred program. His 2012 Breeders Sales Company of Louisiana acquisition, Designer Legs, won the Grade 2 Adirondack Stakes this year at Saratoga Race Course and is being pointed towards the Breeders’ Cup.

Coteau Grove Farms LLC purchased the second highest priced sales horse by Good and Tough out of May Gator by Green Alligator. The purchase price was $70,000.

Consignor Tom Early reported selling just about every horse he had at prices more than he expected.

“The best thing is that the horses are staying local,” said Early.

To view all of the results go to louisianabred.com.