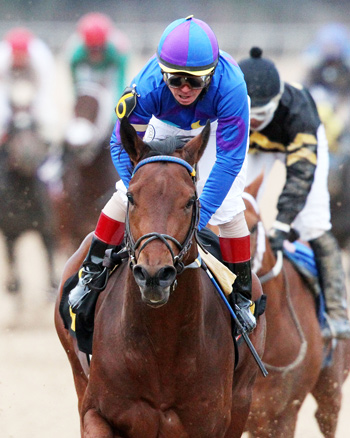 Xpress Thoroughbred’s Discreetness began his 3-year-old season in the same way he ended his juvenile year – by winning a stakes. Ridden confidently by jockey Jon Court, Discreetness wore down a determined Gordy Florida late to win Monday’s $150,000 Smarty Jones Stakes by a neck. In the process, he earned 10 points towards eligibility for the Kentucky Derby and is now ranked 12th on the list of 20 potential starters.

Longshot Gordy Florida broke sharpest of all and proceeded to take the field through early fractions of :23 2/5 and :47 4/5 for the first half mile, while being tracked closely by 3-5 favorite Toews On Ice and Discreetness. The favorite gave way at the top of the stretch as the front runner and eventual winner began their stretch long duel to the wire. The winning time was 1:38 for one-mile over a fast track.

“He broke well and we were in the race, in the hunt early and actually just had a dream trip,” said Court. “It’s good when it comes together like that. I was keeping an eye on the speed horses on the front, of course the Baffert horse, and those were the only two I had to contend with and it worked out today. We have an optimistic outlook with this colt, he’s really moved forward steadily over the last couple of months and we just hope he continues to move forward over the next couple of months to the other big races on his agenda. I’ve ridden a lot of special horses for Jinks and he’s definitely in the upper caliber group.”

Synchrony, the 3-1 second choice, was last early, but made up ground late to get third. He was followed by Luna de Loco, Gray Sky, Toews On Ice, Charming Deputy, Shogood, Force It, Black Ops and Back Togetheragain. Cutacorner, Knights Key and Whitmore were scratched.

The Smarty Jones is Oaklawn’s first race in its four-race series culminating with the $1 million Arkansas Derby April 16. The next race in the series is the $500,000 Southwest Stakes Monday, Feb. 15, Presidents Day.