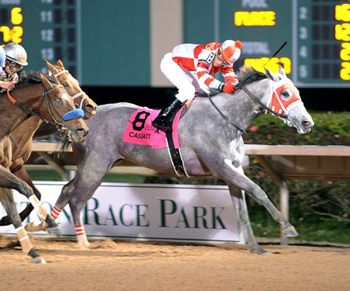 Nominations have closed for the Grade 3, $400,000 Houston Ladies Classic, which will be contested on Saturday, January 30 at Sam Houston Race Park. The mile and one-sixteenth stakes was awarded its graded status by the American Graded Stakes Committee last month and remains the richest Thoroughbred race in Texas.

Inaugurated in 2013, the Houston Ladies Classic was formed to serve as the marquee race for Sam Houston’s meet, which got underway on Friday, January 15. Now in its fourth running, the Houston Ladies Classic will anchor The Houston Racing Festival, which also includes the Grade 3, $200,000 John B. Connally Turf Cup, the $75,000 Frontier Utilities Turf Sprint and the $50,000 Space City Stakes. The January 30 card will get underway at a new post time of 5:00 pm (CT).

Defending champion Cassatt, a 5-year-old Tapit mare owned by Fox Hill Farms, Inc., is nominated and could continue a treasured tradition for trainer Larry Jones. The noted conditioner won the inaugural Houston Ladies Classic with Joyful Victory, another homebred by Rick Porter’s Fox Hill Farms. The striking gray filly set a new track record of 1:42.30 in her 2013 victory, and eclipsed the $1 million mark in earnings in her career.

Jones notes that Cassatt is a late-developing filly, very similar to Joyful Victory. She won the third stakes of her career at Remington Park on December 13, and has posted two bullet works at Fair Grounds for her 2016 debut.

“She is finally settling down, and acts like she might be sitting on a good year” said Jones. “Joyful Victory was her best as a 5-year-old, and this mare, also by Tapit, seems like she is following a similar path.”

The addition of the grade to the Houston Ladies Classic was wonderful news to Jones.

“It really means a lot,” added Jones. “The purse is great, but running in a graded stakes is a great selling point for your owners.”

Other nominated runners include Diva’s Diamond, a 7-year-old multiple-stakes winner owned by Jerry Namy and trained by Karl Broberg.  She has bankrolled $739,608 in her career, winning 11 races and making a start last year in the Grade 1, Spinster at Keeneland. Broberg completed 2015 as the leading North American trainer in wins, according to Equibase. Cali Star, a 5-year-old Street Cry mare, who won the Grade 3 Rampart at Gulfstream Park, has been nominated by Martin Wolfson. Trainer Dallas Stewart has nominated Charles Fipke’s Forever Unbridled. The 4-year-old filly, which ran in last year’s Grade 1 Kentucky Oaks, captured the Grade 3 Comely at Aqueduct on November 28. Shannon Nicole, who ran third in the 2015 Houston Ladies Classic, is now in the barn of Ian Wilkes, is another mare on the nomination list.

The Grade 3, $200,000 John B. Connally Turf Cup will be run at a new distance of one and one-half miles, instead of its previously run distance of nine furlongs. The Connally Turf Cup was awarded Grade 3 status in 2006 and boasts a solid roster of champions including Chorwon, Fort Prado, Rod and Staff and Candid Glen. Trainer Michael Maker won the 2014 Connally with Admiral Kitten and last year’s edition with Coalport.

He nominated Da Big Hoss and Roman Approval with 47 turf specialists nominated for the 2016 stakes.

“In just its fourth running, and first year as a graded stakes, the Houston Ladies Classic has attracted an impressive group of fillies and mares,” said Fred Hutton, Sam Houston Race Park’s racing secretary. “The response to extending the distance of the Connally Turf Cup was also well received by horsemen. We look forward to hosting an outstanding evening of racing.”

The Houston Ladies Classic will benefit the Houston affiliate of the Susan G. Komen For the Cure. Since 1982, Komen has led the way in the fight against breast cancer. Sam Houston Race Park will donate $1 for each paid admission on January 30.

The Houston Ladies Classic will be the first stakes of the Penn Gaming Racing Challenge. The national program, now in its third year, will incorporate over 20 stakes races in 2016 worth over $5.5 million. In its first two years of existence, the Penn Gaming Challenge has been won by top national owners Fox Hill Farms in 2015 and Ken and Sarah Ramsey in 2014, Mike Maker and Chad Brown in the trainer category, while Javier Castellano has been the top jockey in each of the first two years.