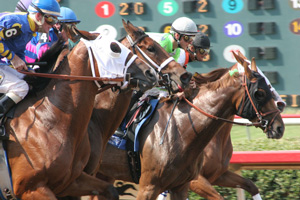 Racehorse trainer Gordon Elliott took to the media to claim that he is happy to have Delta Work clash with his new stable Presenting Percy in the Ladbrokes Champion Chase to be held at Down Royal.

7-year-old Delta Work ended the Ireland Grade One National Hunt season last campaign with a fourth position, which could be said to be disappointing, but he was able to get back in his game as he achieved double victories in the Irish Gold Cup and the Savills Chase Leopardstown, with some high roller casinos checking back on the odds offered for the races. That should be called a double comeback.

The 7-year-old Gelding, which is owned by Gigginstown House, ending his campaign after finishing fifth in the Cheltenham Gold Cup, with Elliot hoping the gelding will be able to improve impressively to go further in the blue riband in March.

Speaking to the media, the Cullentra handler said: “To be only being beaten six lengths in the Gold Cup, with the way he jumped, I thought was very good.

“He’s only seven, so he’s still a young horse – and I haven’t given up on him yet.

“If his jumping brushes up, he’s in the mix.”

Presenting Percy, on the other hand, might just be stuck in his game as he has been unable to replicate his stunning display in the RSA Chase at the 2018 Cheltenham Festival. In his recent racings, his form has been quite shaky.

He was not too far behind Delta Work in the two races at Leopardstown last campaign; however, the 9-year-old gelding was able to make late headway when passing two fences in the Gold Cup at Cheltenham, ever since moving to Elliott from Pat Kelly’s stable.

Eliott, who seem to have no problem having two horses against each other in a race, will be training Presenting Percy for the Gold Cup and also sees the gelding as a Grand National challenger, and casinos en ligne will be offering odds for both horses in the race.

He continued: “The race at Down Royal (on October 31) is a Grade One, so I’d have no problem running the two of them – and I could run two or three more with them.

“Presenting Percy is a horse I’ve always looked up to and said ‘he’s a horse you’d love to have’. I’m very lucky to have him.

“He probably has to improve half a stone to be a Gold Cup horse, but he ran well in a couple of those races in Leopardstown last year and was running a good race in the Gold Cup when he came down.

“To me, he has Grand National written all over him. He’s a good jumper who has a bit of class.

“I’d love to win a Gold Cup with him – but if that didn’t happen, the Grand National is in the back of my head.”

The 42-year-old trainer also has a popular Grand National victor in his stable, Tiger Roll.

The 10-year-old has won the Grand National consecutively in 2018 and 2019. He also has the record of winning four times at the Cheltenham Festival; winning the National Hunt Chase Challenge Cup in 2017, Triumph Hurdle in 2014, Glenfarclas Cross Country Chase in 2018, and 2019.

Elliott has quite the power-ups in his yard.