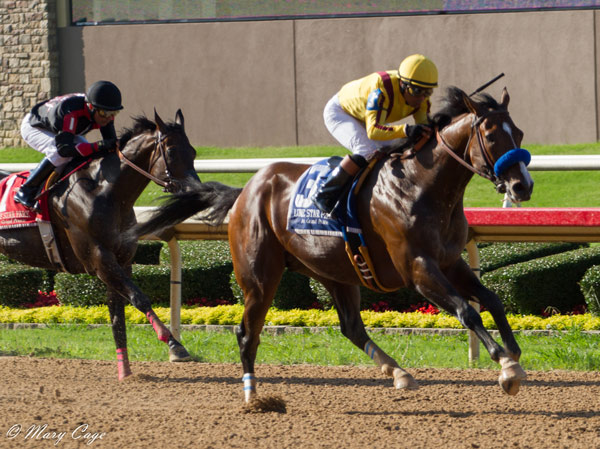 The winner stalked the pace, made a four wide bid at the quarter pole, dueled briefly with the favorite Shotgun Kowboy, and then drew clear to cross the wire two and a half lengths in front posting a final time of 1:43.12. Fractions set for the mile and sixteenth contest were 23.32, 45.90 and 1:10.24 over a main track listed as fast.

“When he broke I knew I had a lot of horse and I knew I had a little target,” said winning Jockey Martin Garcia. “I just followed the number one horse (Shotgun Kowboy) who was one of the favorites and when I found myself outside, I was pretty comfortable.”

This was the first stakes and first graded stakes win for the four-year-old colt by Medaglia d’Oro and out of Supercharger, a daughter of A. P. Indy. Adding the winner’s share of $119,000 purse money today, Cyrus Alexander has bankrolled a total of $299,205, and this marked his fourth win from 15 career starts.