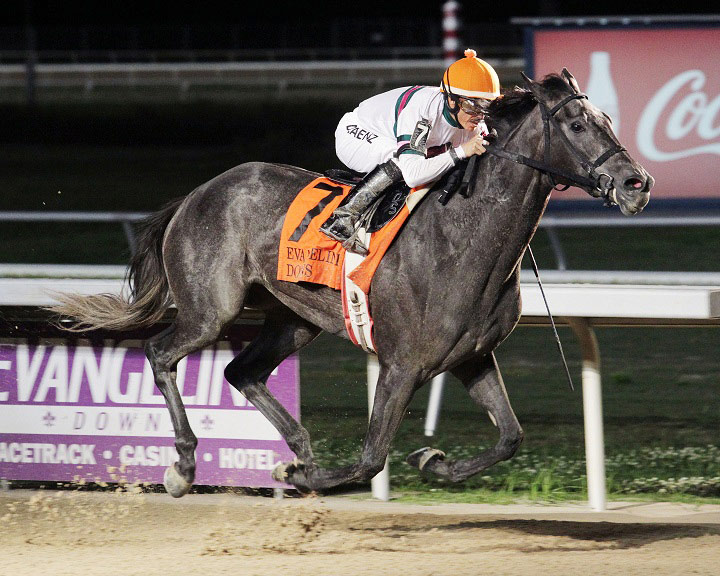 Bermuda Star has won twice in her brief career, one was a maiden-breaking score on the turf at Fair Grounds in February and the second came Friday night in the $60,000 Equine Sales Oaks at Evangeline Downs. On both occasions, Diego Saenz was in the saddle. The Oaks victory was just part of a stellar Friday for the jockey, who won a total of three races on the program.

Bermuda Star, a daughter of four-time Louisiana Horse of the Year Star Guitar, was able to relax off of a trio of pacesetters through easy early fractions of 24.26 for the quarter-mile and 48.78 for the half-mile. She advanced nicely on the far turn and was able to take the lead at the top of the stretch. Once Bermuda Star made the lead, she moved toward the rail and momentarily crossed paths with Madame Begue, who was one of the early leaders. Bermuda Star drew off to win by three lengths at the finish in a final time of 1:46.58 for the 1-1/16 miles over the fast track. She did have to survive a steward’s inquiry and rider’s claim of foul to preserve the victory.

Bermuda Star was bred in Louisiana by Tom Curtis and Wayne Simpson. She is owned by Brittlyn Stable Inc. and trained by Victor Arceneaux. The filly became the first stakes winner for Star Guitar and capped a big day for the stallion’s home, Clear Creek Stud in Folsom, Louisiana. Earlier in the day at Churchill Downs, Louisiana-bred Big World won the $300,000 La Troienne Stakes to become the first Grade 1 winner for Clear Creek stallion Custom for Carlos.