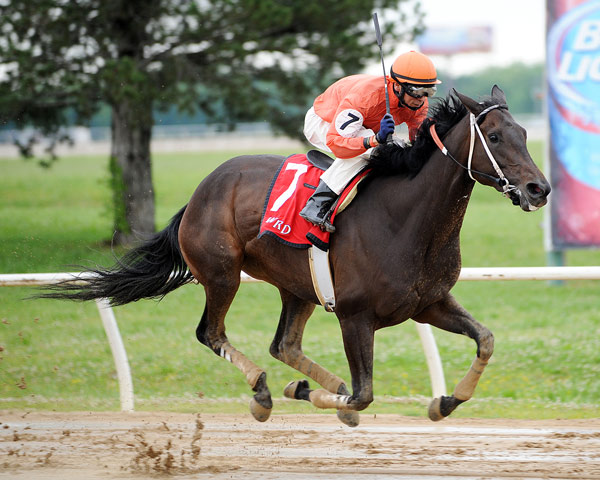 Winning for the third time in four starts, Stonewall Dominion LLC’s Bella Paella scored a three-length victory in Monday’s $55,000 RPDC Classic Distaff Stakes for Oklahoma-bred fillies and mares at Will Rogers Downs. The daughter of Bellamy Road raced a mile and 70 yards in a hand-timed 1:41.80 over a sloppy (sealed) track with Iram Diego riding for trainer Veronica Griggs.

This was the fifth career win for Bella Paella in 13 career starts. The 4-year-old filly earned her first career stakes win in last year’s Useeit Stakes in December at Remington Park and then kicked off 2016 with an allowance/optional claiming victory at Sam Houston Race Park before finishing off the board last time out at Lone Star Park. Her earnings now stand at $121,099. Bella Paella sold for $7,500 at the Texas Summer Yearling Sale in 2013.

Bella Paella was bred by Fred and Susan Davis and Center Hills Farm, with the latter also being the breeder and owner of runner-up Vivid, a daughter of Mighty Acres stallion Save Big Money. The third-place finisher, Greg Frye’s Copper Flash, is also by Save Big Money.