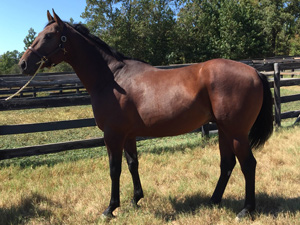 Ballistic Kitten, a son of champion and multiple Grade 1 winner Kitten’s Joy, has been retired to stud and will stand his first season at Double S Thoroughbreds in Poynor, Texas. He will stand for a fee of $1,500 as property of Terry and Rhonda Tuley of Godley, Texas.

The unraced 5-year-old stallion is the first son Kitten’s Joy to stand in the Lone Star State. Kitten’s Joy, the #3 sire in North America last year by progeny earnings, stood the 2015 season for a $100,000 fee.

Ballistic Kitten is out of the Saint Ballado mare Ballade’s Girl and is a full brother to $546,383 earner Coalport, who won the Grade 3 John B. Connally Turf Cup at Sam Houston Race Park and finished second in the Grade 3 Bourbon Stakes at Keeneland Race Course.

Also standing at Double S Thoroughbreds in 2016 will be Total Command, a son of Forestry, and former Texas Champion Captain Countdown, by Relaunch.