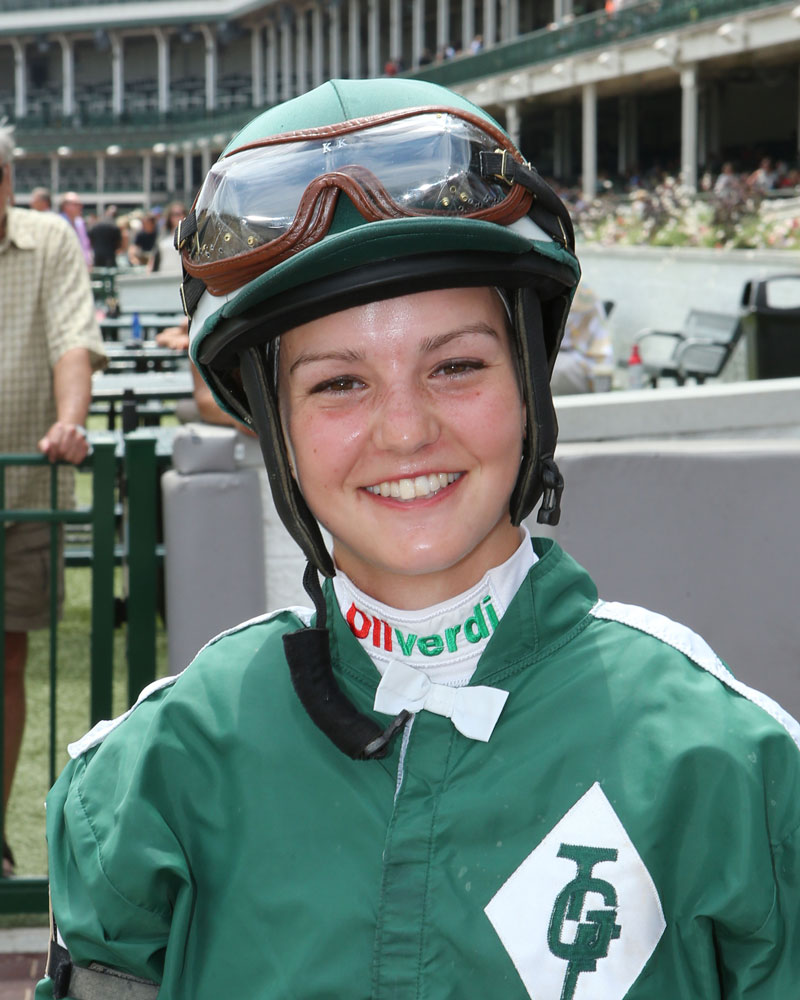 Among Katie Clawson’s goals in 2017 is to win enough races to be in the conversation for an Eclipse Award as the country’s champion apprentice jockey. That journey for Clawson, 19, is scheduled to begin at Oaklawn, where she will ride for the first time during the 57-day meeting that opens Jan. 13.

A native of Mesa, Ariz., Clawson has six victories from 95 career starts this year, according to Equibase, racing’s official data gathering organization, and purse earnings of $173,191. Clawson rode her first winner June 17 at Churchill Downs, a front-running 5 ½-length triumph for trainer Kellyn Gorder, who she had also worked for as an exercise rider for approximately 10 months, including the 2016 Oaklawn meeting.

“My progress has been, I think, better than I expected,” Clawson said Wednesday afternoon. “I thought that maybe it would be a little bit slower of a learning curve, but I had a lot of people helping me along the way that really helped in my introduction period, when you’re learning a lot of things really quickly.”

Clawson is named on two horses Friday at Laurel, but said she plans to be in Hot Springs early next week to begin preparing for the 2017 Oaklawn meeting. She said she decided to winter in Arkansas, instead of Maryland, because several of her major clients last summer and fall in Kentucky, including Gorder; Gorder’s former assistant, Johnny Ortiz; Randy Morse; and Lynn Whiting, will have strings in Hot Springs.

One of Clawson’s victories at the Churchill Downs fall meet was aboard Green Card, a 2-year-old Proud Citizen gelding Whiting trains for Oaklawn owner Charles Cella.

“So there’s mostly just a lot of Kentucky people around, and there’s been interest in naming me on horses,” Clawson said.

Clawson said her agent at Oaklawn will be “Big Steve” Krajcir of Hot Springs, who will also book mounts for two former local riding champions – Hall of Famer Calvin Borel and Jon Court.
Clawson said she has been around horses most of her life and decided to become a jockey in 2009. During this chapter of her apprenticeship, Clawson will receive a 7-pound weight allowance until her 35th winner.

Female apprentice jockeys have had success at Oaklawn, notably Beverly Burress (30 victories at the 2006 meeting) and Kathy Moore (24 in 1980).

“My goals, right now, are just to keep getting better as a rider in general,” Clawson said. “And, then kind of awards-wise, I’d love to be in the running for the Eclipse Award this coming year and have a good career for as long as I can after that.”

Clawson resides in Brazil, Ind., about 65 miles southwest of Indianapolis.

Other scheduled newcomers to the 2017 Oaklawn riding colony include Declan Cannon, Tommy Pompell and Ty Kennedy.