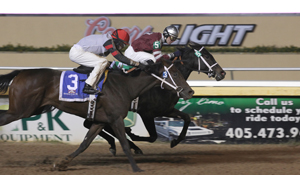 American Sugar won the second stakes race of her young career on Friday night at Remington Park, holding on to win the $50,000 E.L. Gaylord Memorial Stakes by a head over Cat Five’ O.

Owned by Poindexter Thoroughbreds of Springfield, Mo. and trained by Lynn Chleborad, American Sugar was ridden to the stakes triumph by Alex Birzer. While keeping a good position in the backstretch of the 6 ½-furlong stakes race for 2-year-old fillies, American Sugar was full of run entering the lone turn. In order to keep her momentum rolling, Birzer placed American Sugar four-wide as she quickly moved past her foes and had the lead at the top of the stretch.

American Sugar bettered the pace-setting Kentucky Gem but was unable to get much breathing room as Cat Five’ O came after her throughout the stretch run. American Sugar found the finish just in time to hold on, covering the distance in 1:17.44 over the fast track. Kentucky Gem held third after setting the early fractions of :22.08 for the quarter-mile and :45.70 for the half-mile.

The Gaylord victory was the third from six career starts for American Sugar as she won her Remington Park debut. She adds the score to her prior stakes win in the $75,000 Prairie Gold Lassie at Prairie Meadows in Altoona, Iowa in July. A filly by Harlan’s Holiday from the Quiet American mare I Love America, American Sugar was bred in Kentucky by Fares Farm. American Sugar earned $30,000 to move her lifetime earnings to $99,866.

Jockey Cliff Berry won the final race on Friday aboard Purrfume ($10.20 to win) to move within just one of his 4,000 career Thoroughbred victory. Berry rides five times on Saturday night in his quest to become the 65th jockey in racing history to reach the 4,000-win mark. The Jones, Okla. resident leads the current season standings with 43 wins.