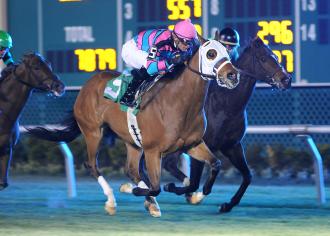 The 9-year-old gelded son of War Chant out of the Trempolino mare She’s Got Class was sent to owner Carl Moore’s farm on September 15. The decision was made following his eighth-place finish in the Turf Monster Handicap on September 2 at Philadelphia Park.

“He was 100% sound and healthy,” said Calhoun. “He just didn’t fire in the Turf Monster. There are just no easy spots to run him, so we felt this was the right thing to do.”

The bay turf sprinter made 53 career starts and retired with a record of 19 wins, 9 second-place finishes, 11 thirds and earnings of $1,953,016. Houston racing fans had the opportunity to see Chamberlain Bridge twice at Sam Houston Race Park. He won the 2011 Railsplitter Stakes and ran a game second to Icon Ike, who set a track record, in the 2013 Champion Energy Services Stakes.

Calhoun has won over 2,200 races and purses in excess of $52 million since beginning his training career in 1994. He admits that Chamberlain Bridge is one of his all-time favorites.