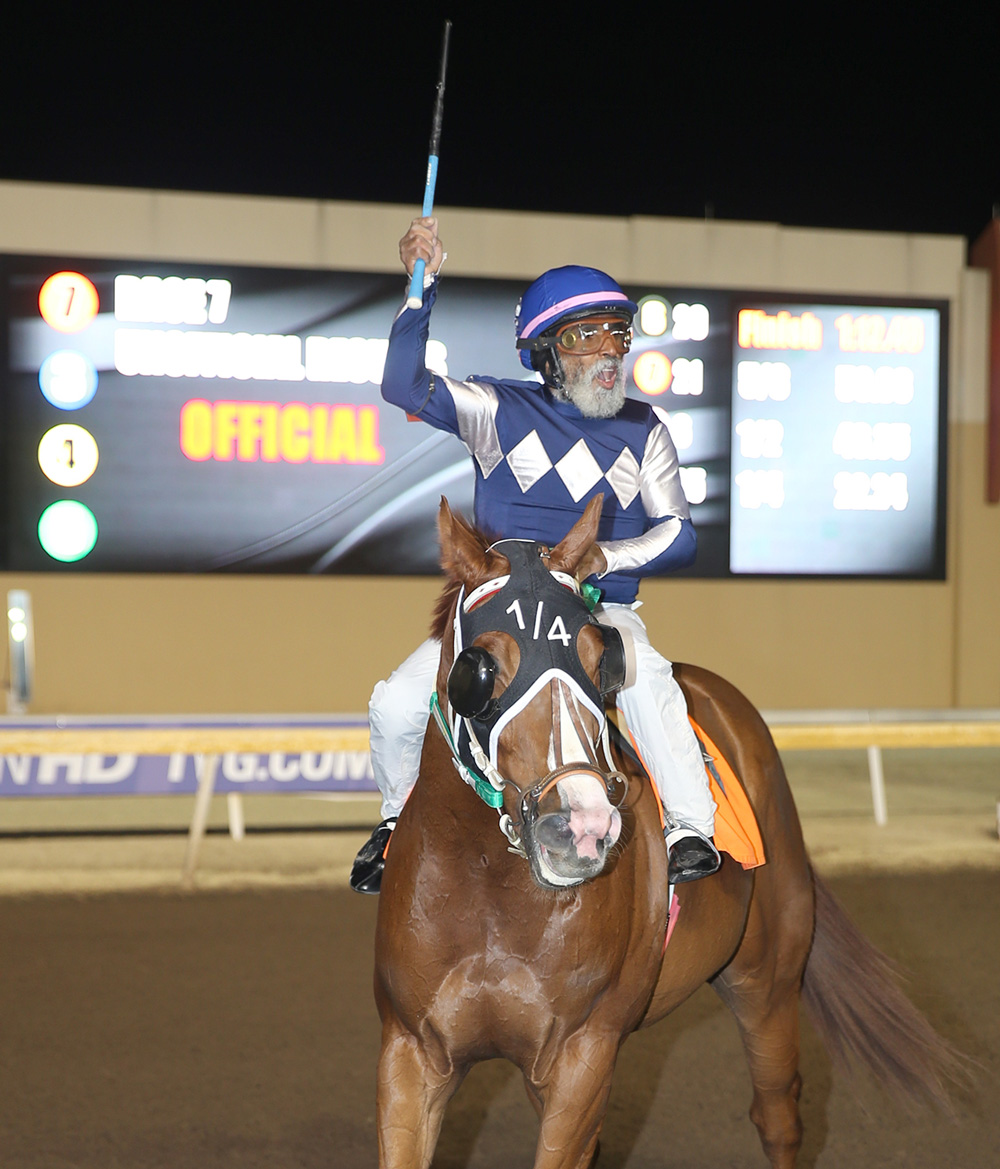 Sexagenarian jockey B.L. Goff hadn’t won a Thoroughbred race at Remington Park in 17 years. The long dry spell came to an end Thursday night with an upset victory in the seventh race.

Goff, who turned 65 years old this year, was 48 when he last had his picture taken in the winner’s circle in Oklahoma City on Nov. 30, 2002, aboard Eggs Galaxy for trainer Michael Gass, Sr. On Thursday night, Goff went straight to the lead aboard second-time starter Salvo, who had bolted in his first try and dropped jockey Jason Eads just out of the gate. The horse that Goff won on was 63 years younger than him. Salvo, a 2-year-old gelded son of Chitoz, had a wide lead as the field of nine turned for home in the six furlongs sprint for maiden claimers, and was trying to hang on coming to the wire. Trainer Tim Martin replaced the injured Eads with Goff and it was a sync-up truly for the ages.

Anybody who’s following horse races knows how important a jockey’s track record is. Goff has ridden 971 horses in his 30 years in the saddle, since 1989, and the elderly rider has won 36 times in his career. Only three of those were on Thoroughbreds in Oklahoma City. Before 2002, Goff’s last win aboard a Thoroughbred was seven years previous, on Sept. 15, 1995, when he won for trainer Chuck Ney aboard Raise or Fold. Goff has four Thoroughbred wins in his career at Remington Park. His first came in 1990.

Goff is now only 76 wins behind leading rider David Cabrera, who sits atop the Remington Park season standings at 77 wins after pulling off another riding triple in back-to-back nights.

Goff said he runs in 5k races for his age-group, 60s-and-up, and has set records in those events. It’s not uncommon for him to drop to the ground and do 30, or more, pushups in the barn area during morning training.

Salvo had a seven-length lead turning for home, but that lead quickly began to dwindle. He was being chased by top jockey Cabrera and third-leading rider Ramon Vazquez and they were closing in. Salvo hit the wire three-quarters of a length in front of Woods of Congaree, Vazquez’s mount, and another neck in front of 2-1 second favorite Willy Special Cats with Cabrera up.

Salvo went off at 21-1 odds despite going off at 46-1 the first time out when he failed to get 100 yards out of the gate before losing Eads. His winning time for three-quarters of a mile was 1:12.49 over a fast track. Salvo set fractions of :22.24 for the quarter-mile, :46.35 for the half-mile, and :59.08 for five-eighths of a mile. Salvo is owned by Big Sugar Racing of Bentonville, Ark. He was bred in Oklahoma by Circle Bar H.