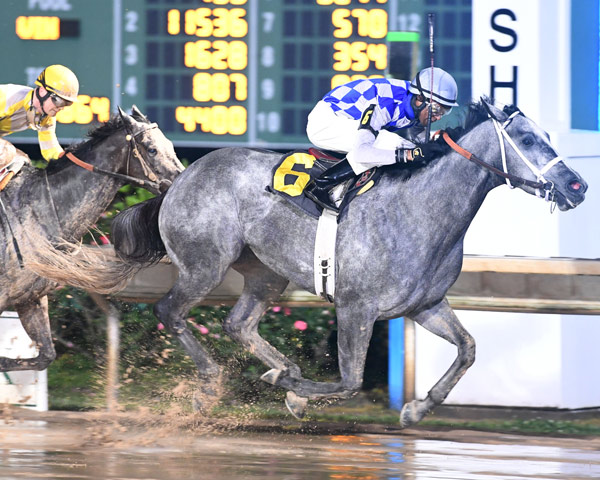 Another rainy evening did not dampen the spirits of Zippit E and Can’t Be Wrong, winners of the two Texas Champions Stakes held at Sam Houston Race Park. Both races featured accredited Texas-breds on the final weekend of the 2017 Thoroughbred racing season.

Zippit E Becomes a Stakes Winner in the $50,000 Yellow Rose Stakes
The first stakes of the evening was the $50,000 Yellow Rose Stakes with a field of ten fillies and mares competing at six furlongs. The duo of Bret Calhoun and DeShawn Parker continued their Texas Champions Weekend stakes dominance with a very classy performance by Zippit E. Bred and owned by Wayne Sanders and Larry Hirsch, the daughter of My Golden Song has not run since July 17 at Lone Star Park. She had built an impressive three-race win streak for Calhoun, who reported that a few minor injuries kept her out of action for the duration of her 3-year-old season.

However, she was ready to roll tonight, dueling briefly with Prada’s Bling before assuming the lead and winning by one length over Valid Bride, who was closing under Ivan Arellano. The final time of the stakes, over a muddy track, was 1:12.30.

“She ran an awesome race,” said Calhoun, who watched her race from Oaklawn Park. “The off track didn’t seem to bother her one bit. She’s always been a nice filly, but I didn’t think she was as good sprinting as routing.”

Parker tallied victories last night with Kat’s Infatuation for Sander and Hirsch in the $50,000 Bara Lass and Douglas Scharbaurer’s More Than Most in the $50,000 San Jacinto Stakes.

It was Parker’s first time aboard the gray filly and the veteran rider made it look easy.

“Bret just told me to try to get her out of the gates quickly,” said Parker. “When I asked her, she gave me a good kick. I thought she might get tired, but she ran a great race”.

Sent off as the second choice at 3-1, Zippit E returned $8.60, $4.40 and $2.80 across the board and improved her career record to four wins from seven starts. Calhoun indicated that Zippit E would make her next start at Lone Star Park, with options in both sprints and route races.

Can’t Be Wrong, a-4-year-old son of Broken Vow, did everything right this evening! Bred and owned by Maccassar Corporation, the bay gelding won three in a row last fall, culminating with a stakes score in the $50,000 Texas Hall of Fame at Retama Park. Trained by Danny Pish and ridden by Ted Gondron, Can’t Be Wrong handled the muddy track with ease, transitioning from last to a driving finish to the wire. He crossed the wire of the mile and one-eighth feature in 1:54.08, a margin of 2 ½ lengths ahead of Mav Master.

“The race went well,” said Gondron. “The pace was fast enough for him as he’d been having to run some races that did not set up that way. I had plenty of horse left when we punched home.’

The surface switch was not a factor, according to Gondron.

“It wasn’t a problem as Danny’s horses are very versatile,” he said. “We just stuck to the same game plan.”

Pish has won five previous editions of the Richard King, including last year’s race with I am Jane Dough. Can’t Be Wrong ran sixth here in the $50,000 Houston Turf on February 11 and Pish was asked why tonight’s outcome was far superior.

“There are so many clichés in this game that hold water,” said Pish. “Pace makes the race is certainly one that stands out. He’s an established horse and showed up tonight in big fashion.”

Mav Master made a nice run in the stretch under Paul Nolan to complete the exacta. Gottherightonebaby ran third, followed by P Millers Clock, post-time favorite Magna Breeze, Bonjour Baby and Sing It Up. Special Praise and Preacher Preacher were scratched from the race when it came off the turf.