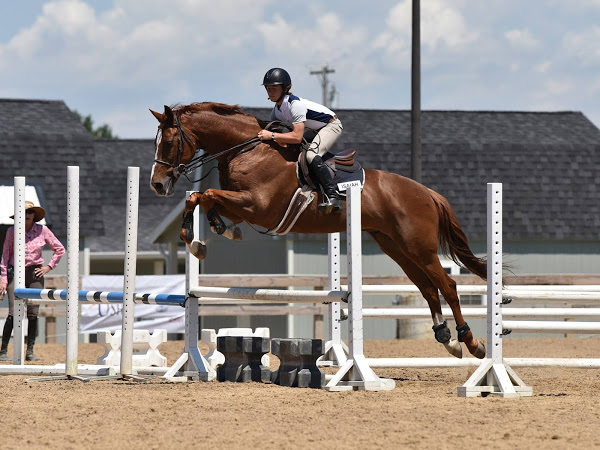 Horses have always been part of his life. It was just a matter of time before apprentice jockey Isaiah Wiseman got his start in the Thoroughbred industry, a plan he had from a young age.

“My dad (Jason Wiseman) is a farrier and I was born in Lexington (Kentucky), so I was raised around the racetrack until I was eight or nine,” said Wiseman. “My family moved to Fort Wayne (Indiana) and it was always in the back of my mind that I wanted to be a jockey. There isn’t much opportunity for racing in the Fort Wayne area, so I had to put that on hold.”

Wiseman’s path changed course when the family purchased an Appaloosa. Initially, he was a barrel horse, but Wiseman wanted to put a racing saddle on him. Although his sister, Bella, continued in barrel racing, Wiseman had his sights set on another discipline and was soon immersed in the show jumping world.

Wiseman quickly caught on in show jumping. In 2017, he was a top rider in the Emerging Athletes Program with his most prominent performance as a Gold Medal placing in team competition of the Pony Jumper Championships at Kentucky Horse Park in 2016. He also earned a Gold Medal in the U.S. Hunter Jumper Association’s Young Rider Championships at HITS Balmoral in Crete, Ill., which would mark his final competition in August 2018.

“From the age of 10-18, that’s all I did was show jumping,” said Wiseman. “I was out of school six to eight months a year on the show circuit. After I graduated from school (Fort Wayne Bishop Dwenger), I had to make a decision, and I decided to transition over to racing so I moved to Ocala (Florida) full time and started galloping.”

Wiseman left the family’s homestead, Blue Willow Farm in Fort Wayne, at the age of 18 and began galloping two-year-olds for Nick de Meric Thoroughbred Sales in Ocala. That position led to a job with Michelle Elliott as an exercise rider at Indiana Grand last year. Wiseman made his racing debut at Indiana Grand as a jockey in August 2019, riding in seven races before going to Hawthorne in October. His first career win came shortly after his arrival aboard Applesolutelyright. In all, he completed the meet at Hawthorne with 10 wins.

“I was off from riding from January until they started up here in June,” said Wiseman. “I’ve really enjoyed riding with these guys and getting to know them and learning from them. I don’t see this as a job. Coming from show jumping, you have to be so focused on technique all the time. It’s nice to be involved in this business because it’s always been in my family. It’s always what I wanted to do.”

So far this season at Indiana Grand, Wiseman has recorded seven wins with two riding doubles to his credit. He is the track’s current leading apprentice rider for 2020 with agent Penny Fitch-Heyes carrying his book. As far as plans for the end of the meet in Indiana, Wiseman is still up in the air.

“I have no set plans right now, I guess it will depend on the restrictions for the future,” said Wiseman in reference to the unprecedented season of racing due to Covid-19. “I’m just keeping an open mindset. Horses have always been my number one and this is all I’ve ever wanted to do. I’m just enjoying it so much right now.”