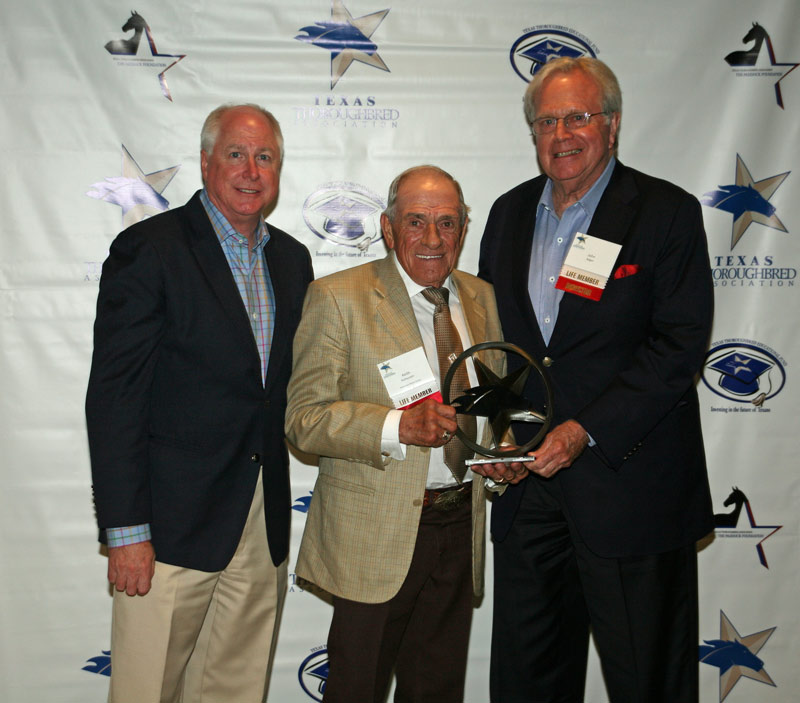 The Texas Thoroughbred Association held its annual awards banquet on Saturday night at Lone Star Park with Ivan Fallunovalot receiving the Texas Horse of the Year award to top the previously announced equine winners. The TTA’s human awards were not announced in advance, and the top honor, the T.I. “Pops” Harkins Award for lifetime achievement, went to William S. Farish III.

At the TTA’s board meeting earlier in the day, Phil Leckinger of Tioga, Texas, was elected as president of the association. Leckinger brings 30 years of business experience and 20 years in the horse racing industry.

To the general public, Farish is known as a successful businessman, philanthropist and the former U.S. Ambassador to the United Kingdom, and on the national racing scene he is a two-time Eclipse Award winner for Outstanding Breeder and the 2009 recipient for the Eclipse Award of Merit for lifetime achievement. His Lane’s End farm in Kentucky is one of the leading stallion farms in the country.

In his home state of Texas, Farish has been a vital part of the industry, as he served on the TTA Board of Directors and as the TTA’s president in the 1980s before pari-mutuel was legalized once again in the Lone Star State. His Lane’s End Texas, located in Hempstead and formerly known as Huisache Farm, stood all-time leading Texas stallion Valid Expectations and current leading Texas stallion Too Much Bling. Farish has been a perennial top breeder and owner in Texas, and he has been a major donor to the Texas Thoroughbred Educational Fund, which provides grants to TTA members and their children to help them reach their educational goals. Several scholarship recipients were on hand to present the trophy for that night’s Lane’s End Stallion Scholarship Stakes for Texas-breds.

Other human awards went to Dallas and Donna Keen’s Remember Me Rescue as the Thoroughbred Charities of America Award of Merit winner for Texas. Remember Me Rescue helps find new careers and homes for retired racehorses. The Allen Bogan Memorial Award went to Denis Blake for his efforts to promote the TTA and Texas racing and breeding through American Racehorse magazine. The Blood-Horse leading breeder award went to Eileen Hartis, the breeder of Ivan Fallunovalot.

A son of Valid Expectations, Ivan Fallunovalot won four of seven starts in 2015 with earnings of $312,200. Trained by Tom Howard and owned by Lewis Mathews Jr., the gelding won the King Cotton Stakes at Oaklawn and the David M. Vance Sprint and Remington Park Sprint Cup in Oklahoma. He ended his season as the only Texas-bred to compete in the Breeders’ Cup, and he finished ninth in the Breeders’ Cup Sprint.

Following are all the equine award winners: