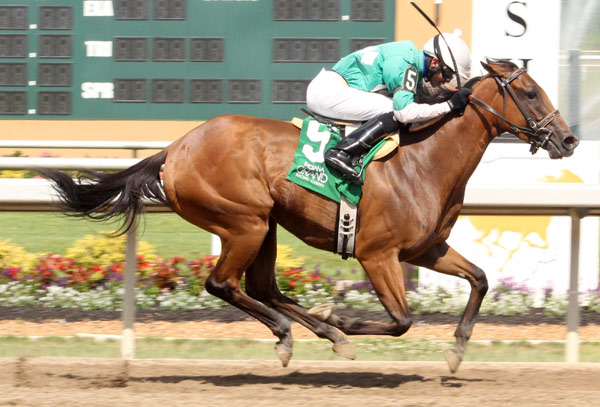 It was time for Whistle Stop to step up and blow her own horn and that is just what she did in the ninth running of the $100,000 Hoosier Breeders Sophomore Stakes for fillies Wednesday, June 21 at Indiana Grand. Whistle Stop blew by the competition in the stretch to rally home for her third straight win with Jockey Marcelino Pedroza aboard.

Pedroza had Whistle Stop alert at the start, gunning out of the gate in search of one of the top spots in the eight horse field. Bar Rag and Tommy Pompell maintained their positioning inside as the race leaders while Whistle Stop tracked their progress along the outside with Midnight Blvd and Leandro Goncalves sitting closely in third along the rail.

Bar Rag continued to lead the way down the backstretch as heavily favored Defining Hope, ridden by Malcolm Franklin, waited patiently in mid pack to make their customary move around the turn. Defining Hope moved in a flash around horses and by the time the field had landed at the top of the stretch, she was challenging Bar Rag and Whistle Stop for the lead while Midnight Blvd was also close behind on the inside.

In the stretch, Whistle Stop shook loose from the competition and surged forward, pulling away for the victory and her first career stakes win by the margin of two and three-quarter lengths. Midnight Blvd split horses late to finish second over Defining Hope for third.

“I really didn’t think she (Whistle Stop) would be able to win this race based on how little she is,” said Pedroza, who has guided her to all five of her career wins. “But she has a big heart and she tries so hard. I thought for a second she was going to run off in the first turn but she finally relaxed and was nice and quiet with the other horses around her. She really responded when I asked her in the stretch.”

“She (Whistle Stop) is nice and easy to care for in the barn,” said Brandi Garner, assistant to Mike Lauer. “I wasn’t sure she could go the distance but she proved to us she can.”

Whistle Stop is owned by Penny Lauer, trained by Mike Lauer, and was bred by the Lauers at their farm in Finchville, Ky. They have been active in the Indiana breeding program for decades and Lauer serves on the Indiana Horsemen’s Benevolent and Protective Association (HBPA) board. The daughter of Into Mischief increased her career earnings to more than $185,000 and is now five for 11 lifetime.

“We’ve put a lot of years into it and to get a win like this (with this filly, Whistle Stop) makes it worthwhile,” said Penny. “We have liked her since she was a baby and we have always thought a lot of her mother.”

Whistlin Jean, the dam of Whistle Stop, was an impressive contender on the Indiana circuit during her career. She won nearly $200,000 for the Lauers and posted five wins, including a win in the Hoosier Breeders Sophomore Fillies Stakes in 2010 when it was held at Hoosier Park.

Retrospection and Robby Albarado proved to be the toughest pair in the ninth running of the $100,000 Hoosier Breeders Sophomore Stakes on the same card. The duo found room at the top of the stretch and got through en route to their first career stakes win.

Starting from post one in the 10 horse field, Albarado had Retrospection in contention early and was covered up by horses for a majority of the race, sitting in mid pack as Evader and Marcelino Pedroza led the way through early fractions of the one and one-sixteenth mile race. As the field approached the final turn, the field became even more bunched up leaving several horses on the inside searching for room, including Retrospection.

At the top of the stretch, Retrospection found just enough space to get through his opponents and find a clear lane to run. Mind Reader and DeShawn Parker also found a place to accelerate and joined Retrospection for the stretch drive. In the end, Retrospection had the advantage on the inside to defeat Mind Reader by the margin of a head. Dox Folly and Malcolm Franklin rallied from the back of the pack to slide in for third.

“He (Retrospection) held me pretty good, he’s a big horse,” said Albarado, who was joined by his son, Liam, in the winner’s circle for the interview with Peter Lurie. “But he was able to find a seam and pushed through. It was a little tight and I able to adjust him a little at one point. I think he has a little more depth to him.”

Retrospection was making his fifth career start for the Burketts. The Daaher gelding, trained by Mike Maker, more than doubled his career earnings and now sits just under the $100,000 mark. The win marked his second trip to the winner’s circle in his career that started late in 2016 at Indiana Grand.

“He (Retrospection) has always been an honest horse and he gives us a hard try every time,” said Burkett. “I thought as long as he has a hole, he would be committed to be right in the hunt. Mike (Maker) and his assistant, John (Lynde) have done a great job with him. We’ll just enjoy this moment and talk about his next race later.”