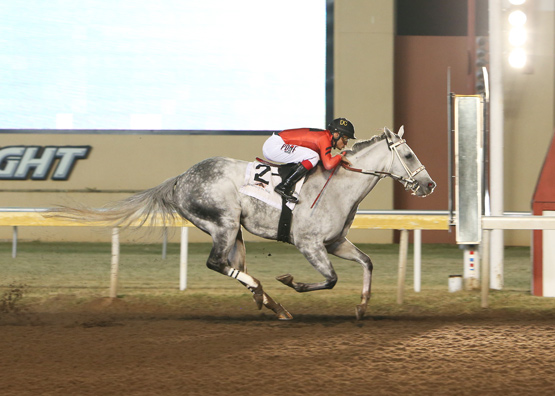 The Remington Park history book was rewritten Friday night as Welder moved into the number one spot all-time in stakes wins here with 11.

Trainer Teri Luneack put all the records broken and Welder’s name being etched in stone in the Oklahoma racing history book in perspective.

“I’m obviously never going to see another horse in my lifetime like this,” Luneack said. “In fact we probably won’t see another horse at Remington Park like this in our lifetimes. I mean what horse goes out in 44 (seconds) and change for the half-mile and just drives away without David (Cabrera) ever having to cock the stick? It’s craziness.”

Welder, owned by Ra-Max Farms (Clayton Rash) of Claremore, Okla., finished the 6-1/2 furlongs in 1:15.49 seconds over a muddy track and wasn’t even breathing hard, returning to the winner’s circle. Jockey David Cabrera never asked him to run.

Early on, Welder and Fly to the Bank looked each other in the eye with that lightning fast :44.55 seconds half-mile and the winner was gone by the time he hit three-quarters of a mile in 1:09.04. The 7-year-old gelded son of The Visualiser, out of the Tiznow mare Dance Softly, just turned on the gas from there to win by 5-1/2 lengths over Fly to the Bank. In fact, Welder, who may be the calmest horse ever to be saddled in a paddock, always seems far less worried than his jockey and trainer.

“I’m always so nervous,” said Luneack. “I’m standing over there watching and saying, ‘Oh gosh! Oh gosh! Oh gosh!’ He’s going 44 and just keeps going. I mean, who does that?”

“Sometimes I think he goes out there faster than he should but I just let him do what he wants to do, and then he just does it all on his own,” Cabrera said.

Welder, a two-time Oklahoma Horse of the Year and the only horse in Remington Park History to be voted two-time Horse of the Meeting, also won for the 14th time at the Oklahoma City track. That puts him one win behind Highland Ice and Elegant Exxactsy, who had 15 apiece. Luneack said Welder would be back to race at 8 years old in 2021 as long as he stays sound. It’s possible he could face the Breeders’ Cup Sprint winner Whitmore at Oaklawn in Hot Springs, Ark., in the spring. Whitmore beat Welder by two lengths in the 2018 Hot Springs Stakes.

“It’s such a blessing to have this horse,” Luneack said as she held her brand new grandbaby girl Ava in the winner’s circle. Then nodding to Ava, she said, “She’s perfect,” like the legendary Oklahoma-bred sprinter she trains. He was bred by Center Hills Farm’s division of Mighty Acres Ranch in Pryor, Okla.

Welder’s record stakes wins in Remington Park history have been four Silver Goblins, three Oklahoma Classics Sprints, two David M. Vance Stakes and two Remington Park Turf Sprints, one of those being taken off the grass and moved to a sloppy track.